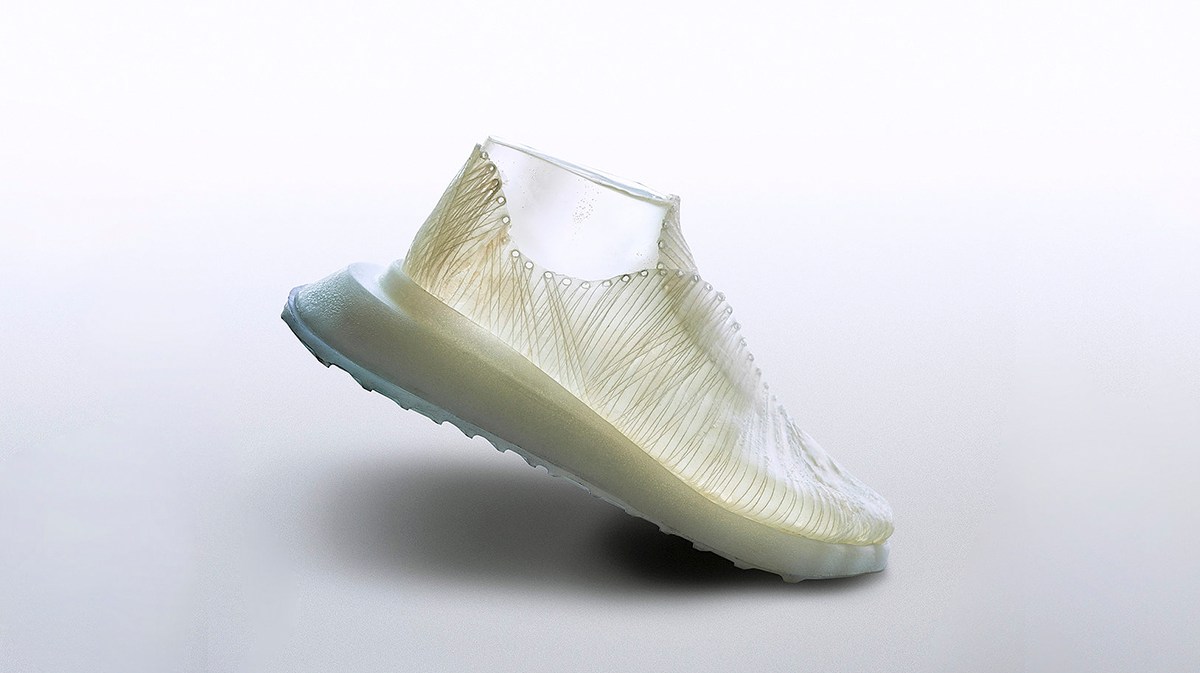 Why Are Trainers Used to Showcase Innovation?

Why Are Trainers Used to Showcase Innovation?

When launching a new biomaterial, or manufacturing innovations, many designers will use trainers as a product to showcase the application. So why is a shoe the perfect way to show people new materials and how they can be used at the current time or in the future?

Trainers are generally comprised of multiple pieces of fabric, often either plastic or leather. The form is created by connecting these pieces together, contouring around the foot for structure and support.

Although trainers are perhaps not the most polluting product on the market today, their material use is not only unsustainable but their multiple materials mean it is almost impossible to dispose of them correctly making them one of the most unsustainable products in our wardrobe. As people own multiple pairs, fashion trends change, and some trainers get worn down easily, this means that there is a large amount of waste associated with them. The US alone throws away at least 300 million pairs of shoes each year and it is estimated that a typical pair of running trainers generate approximately 13.6 kilograms of CO2 emissions, with leather trainers potentially being even larger due to cattle.

Trainers are made up of multiple components, therefore it becomes a great way to showcase a material or multiple materials within the same product. Each part of the shoe can have different properties depending on the materials needs.

As trainers need to be hard wearing and meet performance requirements they almost become a challenge for designers. If footwear is created that is usable, and is up to the standards needed, then this accomplishment truly shows the materials promise for future applications.

Below are some examples of how trainers have been used showcase biomaterials and sustainable material production methods. 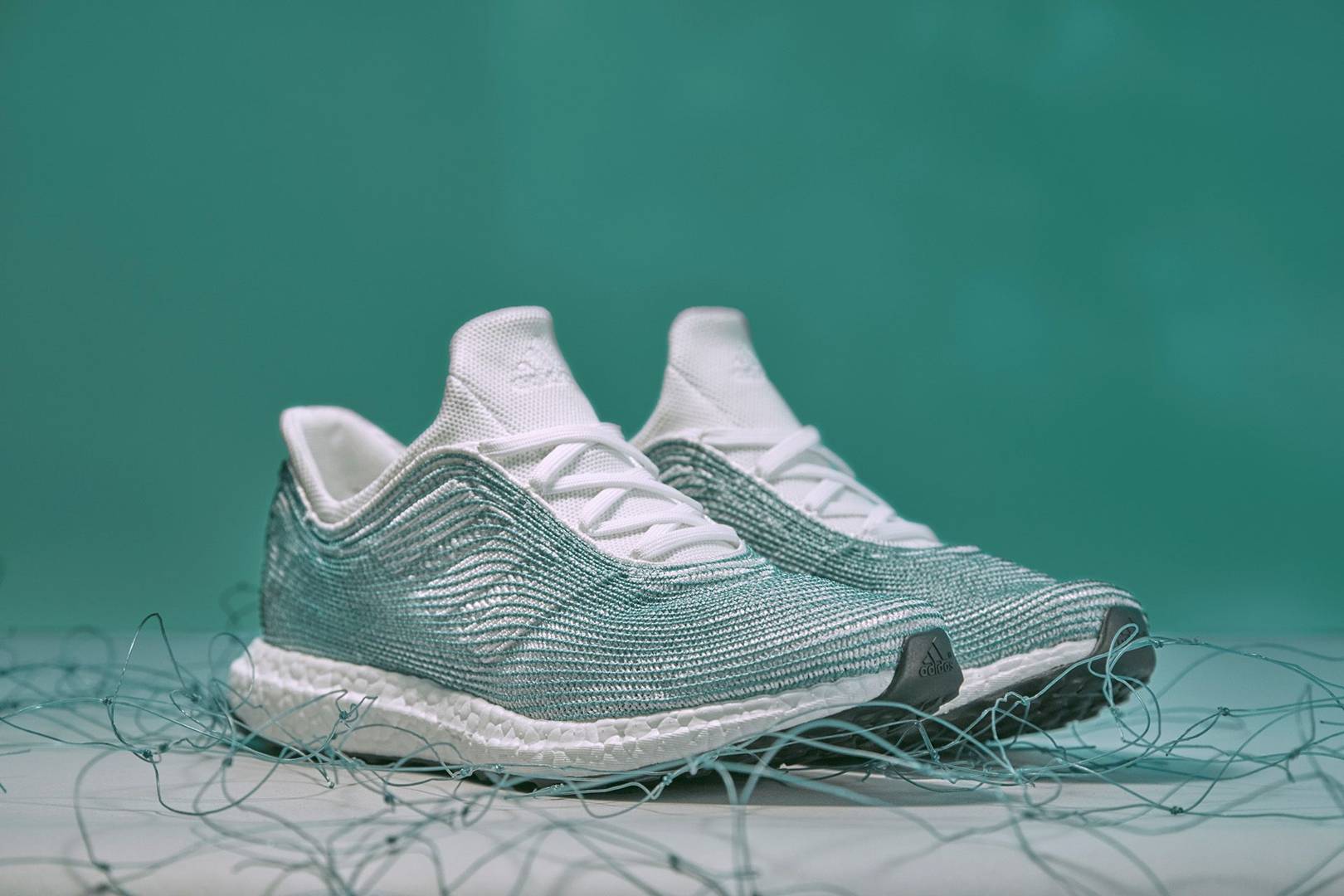 One of the most famous sustainable trainers is Adidas ocean waste shoe, in collaboration with Parley for the Oceans. The synthetic fibres in Adidas’ usual production are replaced with yarns made from recycled plastic recovered from the sea. This is one of the products that helped launch peoples understand of ocean plastic waste, which now is seen a major issue world wide. By creating a product that was accessible to the general public, people were able to feel like they were helping make a difference. The design of the trainers also helped with the narrative. The initial pair featured wave like patterns which depicted the ocean. While later pairs are all a shade of ocean blue, and a pair of Ultra Boosts have even been designed by fashion designer Stella McCartney. 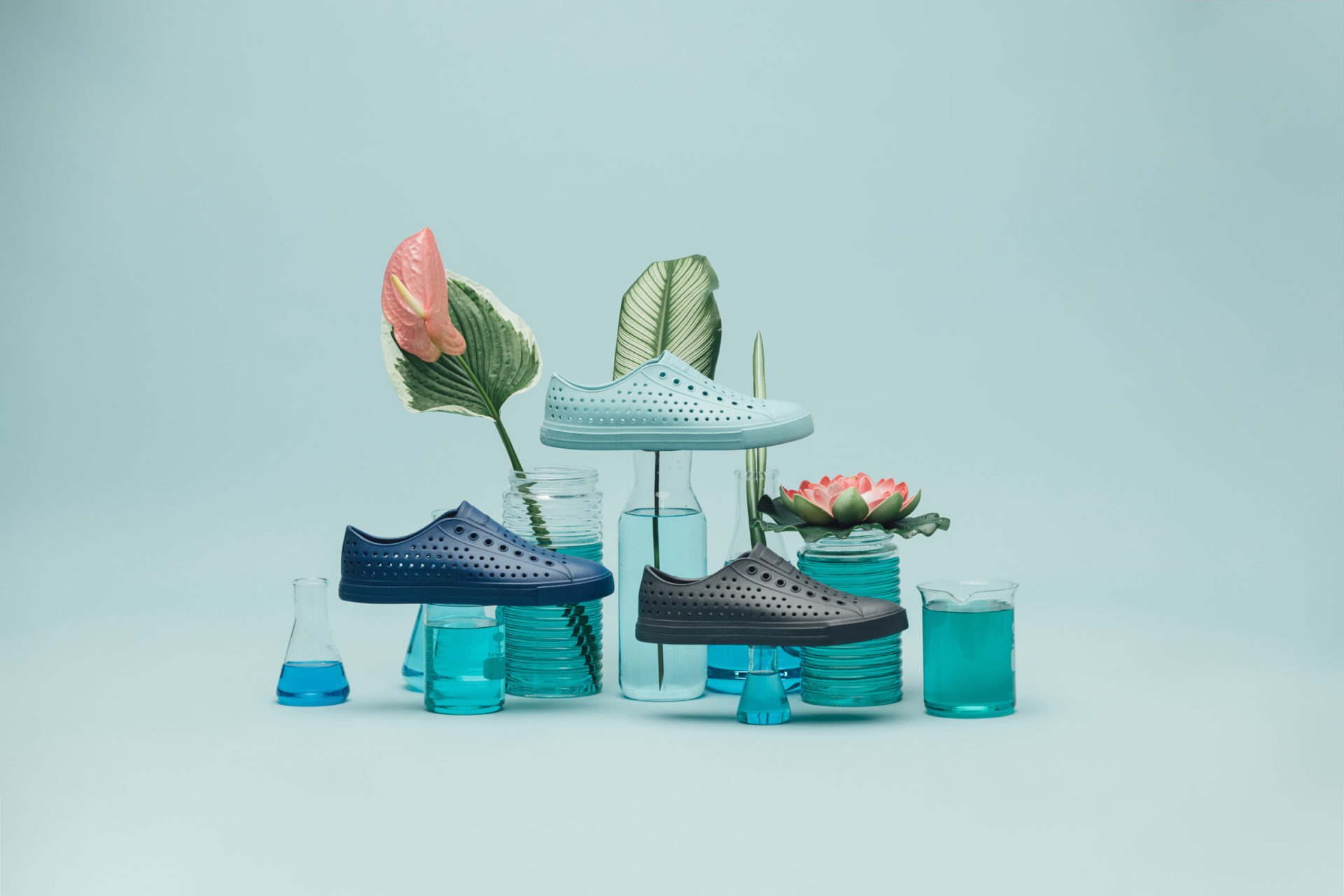 One of the brands who are the frontrunners in sustainable shoe design is Native Shoes. They have created a variety of styles which all explore biomaterials and different applications of these innovative materials. One pair of zero-waste trainers showcases a variety of biomaterials. They are made from vegan-friendly materials including eucalyptus, pineapple husk and dried hevea milk. Once the trainers have reached the end of their life, consumers can put them in their green bins to compost. Another pair of eco trainers they have created come as a continuous piece of algae-enriched EVA.

Biological processes were used to grow trainers by designer/scientist Jen Keane. She manipulated the growing process of k. rhaeticus bacteria, to employ it in a new form of ‘microbial weaving’. The upper part of the shoe is grown from a single piece of material. This shows the promise of having products with little or no wastage, made from natural processes. Further development has lead to genetically modifying bacterium with a gene that makes it produce melanin – a black pigment found in hair, skin and squid ink. The trainer is woven and dyed by a single genetically modified organism, making it 100% compostable and free from any synthetic materials. 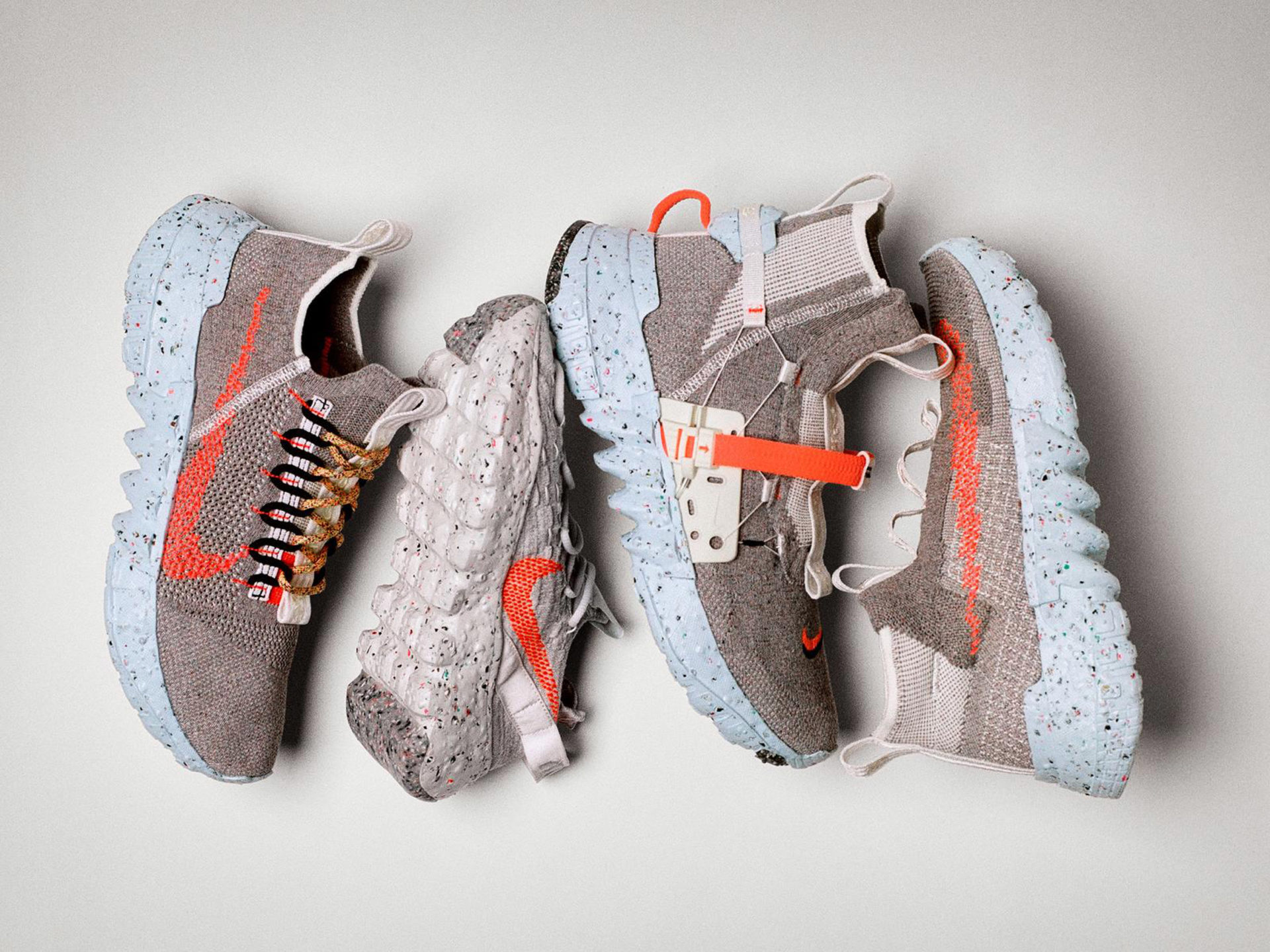 Nike has used innovation as a way to create a more sustainable and efficient process called. Flyknit where yarn is woven to create one piece of upper fabric. Their new Space Hippie Sneakers are made from scrap material taken from Nike’s factory floors. The brand is keen to improve their environmental footprint by trying to implement a circular economy which aims to eliminate waste and pollution from manufacturing. The upper of the trainer uses Flyknit technology to weave 100% recycled materials, including plastic water bottles, T-shirts and textile scraps. This new release represents the change in consumer behaviour and mindset. Nike previously released a shoe called “Trash Talk” in 2008 from Nike’s manufacturing waste which was not as successful as first hoped. Space Hippie has a similar narrative but has been released due to societies shift in wanting to be more sustainable, and showcasing that they are.