We may have spoken about the company Bolt Threads before due to their innovations within the biomaterial sector, such as their spider silk, but we think it’s important to talk about them again right now. Mycelium is extremely important to us, when we launched our mycelium packaging it was one of the steps forward we took in trying to give back to nature. But this was a risk due to costing, feasibility and timescales. Sometimes, taking the more sustainable route can be much harder for companies, and even consumers. But this month Bolt Threads have released that they will now be backed by some of the biggest names in the fashion industry in order to bring their ‘Mylo’ material to market. Brands such as Adidas, Stella McCartney, Lululemon and Gucci’s parent company Kering have teamed up to fund the material grown by mycelium in an almost never seen before newly established business consortium, to invest seven-figures to help amp up production capabilities of this biomaterial. This is a huge step forward for biomaterials and the planet in general, allowing these much more sustainable options to be cheaper and easier to purchase. Hopefully allowing others to follow in their footsteps. 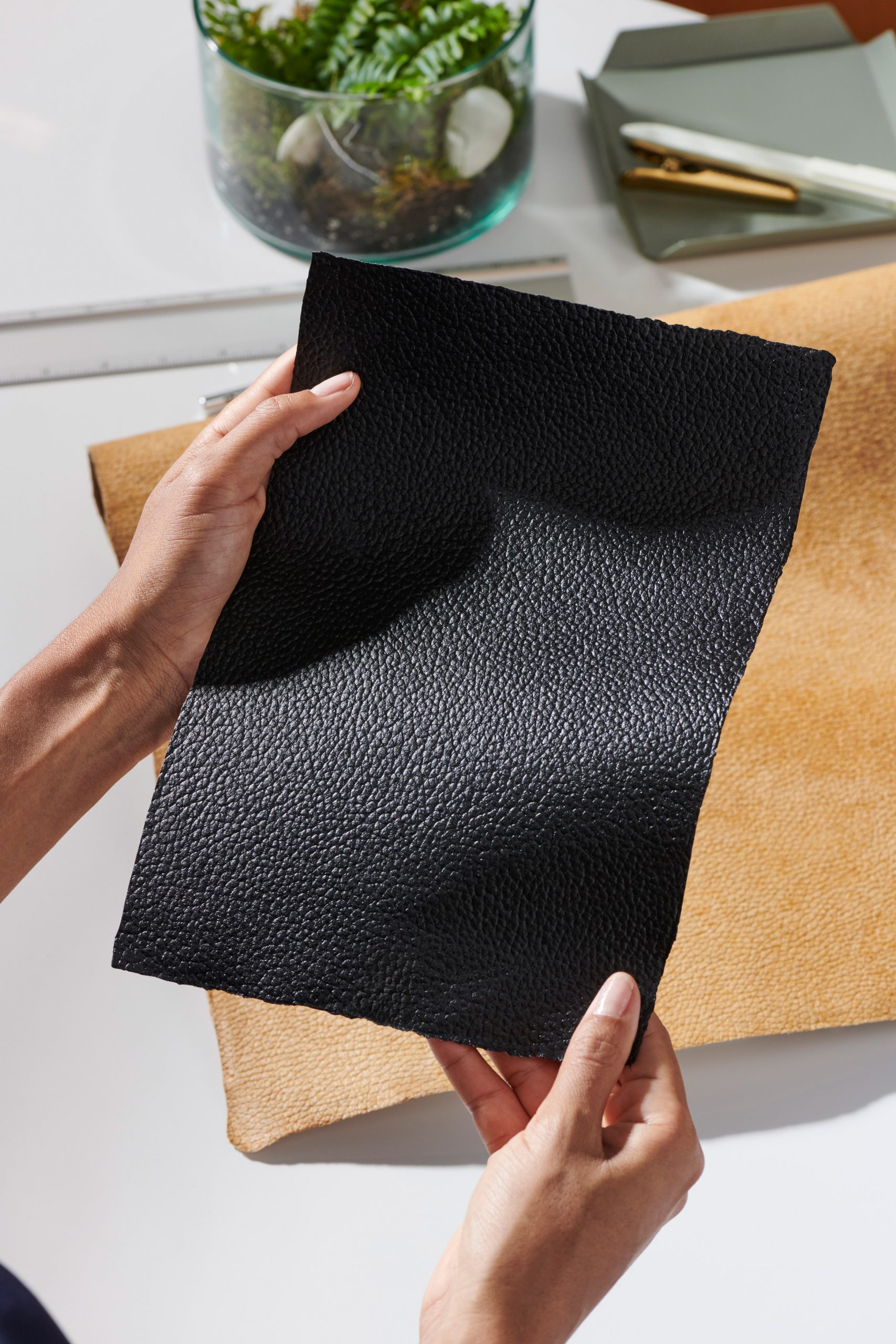 Mycelium is the root system of mushrooms. The mushrooms that we know well, and eat, are actually the fruiting systems of the fungus. Mycelium is not just important to produce these mushrooms, it also is one of the most important parts in our ecosystems, and works in symbiosis with many plants. The mycelium takes in small molecules of food from sources such as wood or plant waste by excreting enzymes that break these materials down so they are more digestible. When the fine threads begin to weave through the substrate/food it acts as a glue, making a mass. Mycelium is the perfect biomaterial as it is fast growing, and can be scaled into macro-size structures, with the fruiting bodies also being used as a material.

Since the 1950s patents have been filed for fungus material for paper, wound dressings and a range of other products. But it is only in the last decade that companies such as Bolt Threads, Mycelium Made, and MycoWorks have used mycelium to make products such as fabrics for the fashion industry, which are more refined and produced in larger quantities. 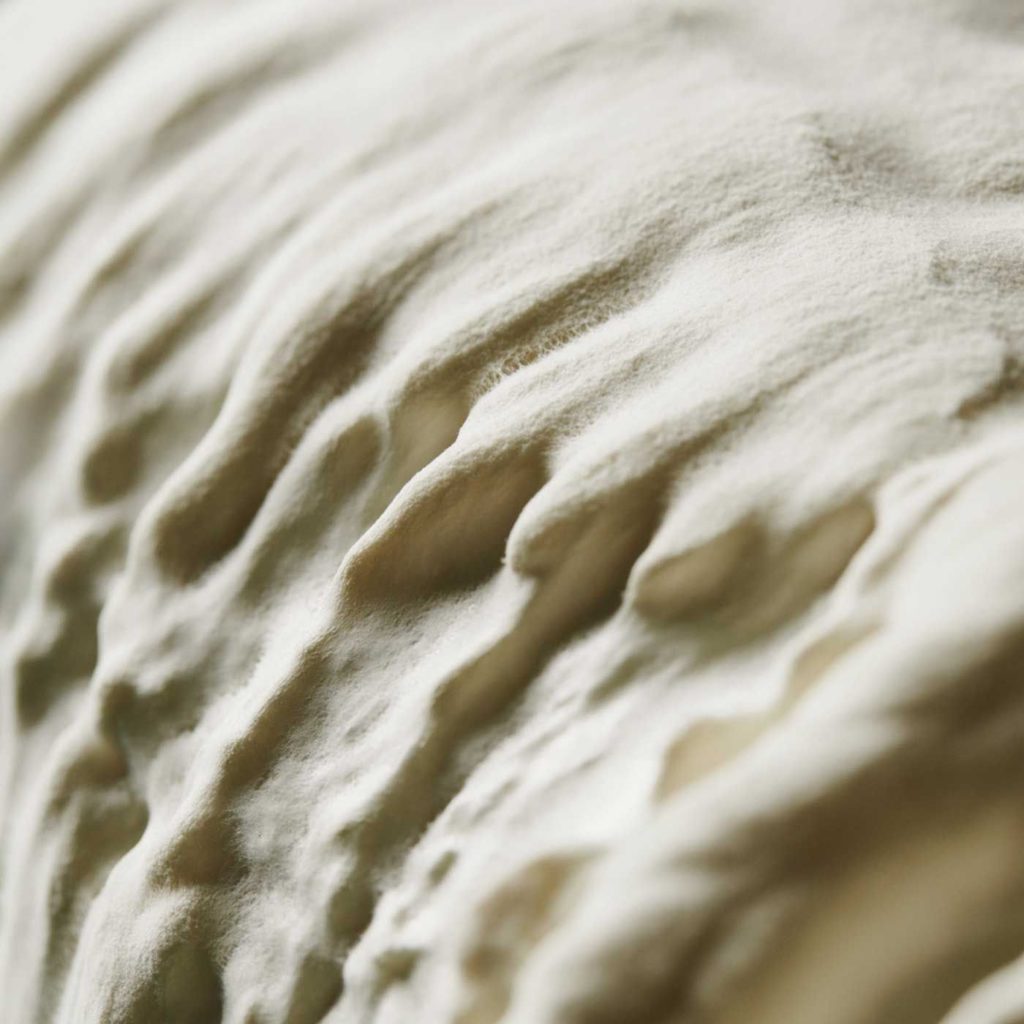 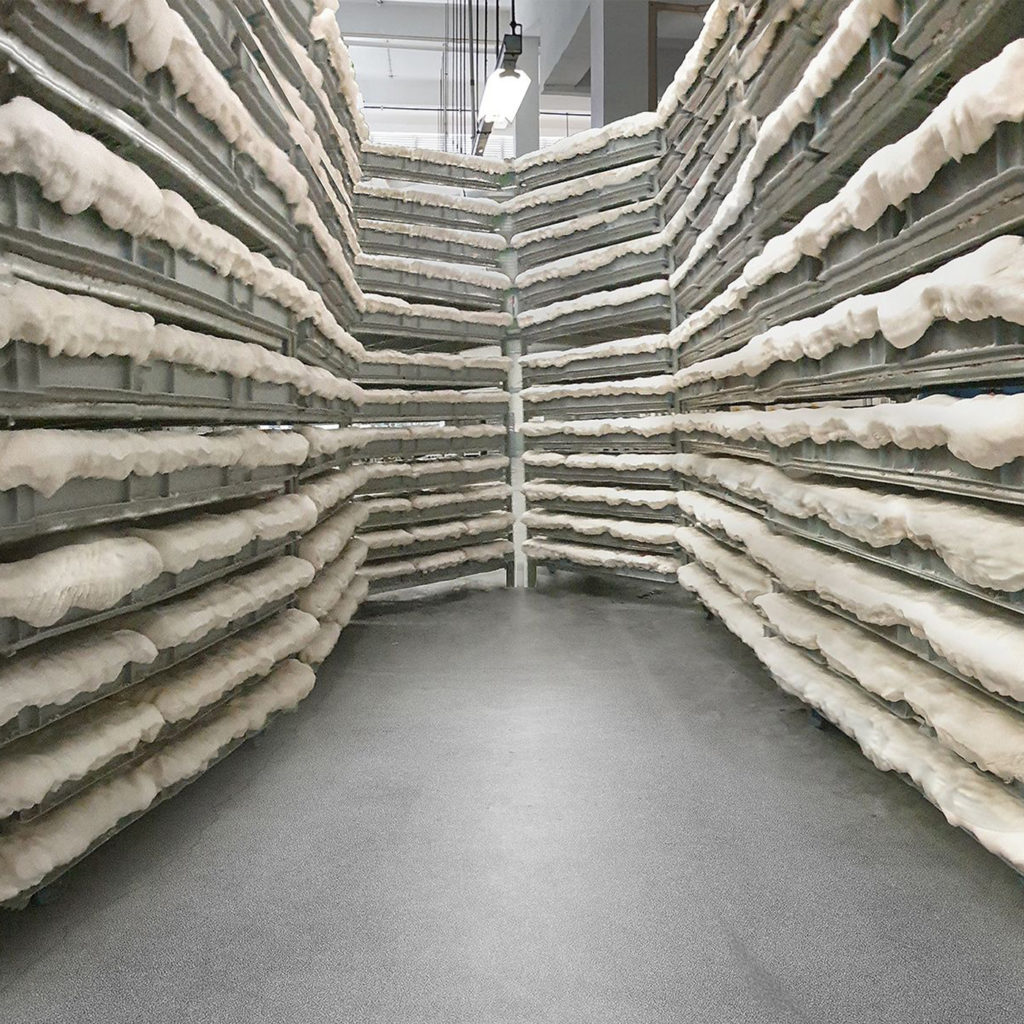 Biotech company Bolt Threads developed technology to replicate the spider’s silk-producing process sustainably, and in a way that’s industrially scalable instead of having to farm arachnids. The fibre is stronger than any steel, weight for weight, and has high tensile strength, elasticity, durability, and softness. But in 2018 they began producing Mylo, a material made from mycelium. This material looks and feels like animal leather, and can be used for a variety of applications within different sectors, such as fashion and automotive interiors. But this material is not only just a vegan alternative to animal leather. It also emits less greenhouse gases and uses much less water and resources, only using half the volume of water needed for cotton production. Animal leather can be seen as a byproduct of the meat industry, but it produces a large amount of pollution from its curing and tanning processes. As these processes generally use harmful chemicals such as chromium, they can lead to wastewater pollution, leading to health effects for workers and locals.

Bolt Threads also believes that this product can be easily scaled up. The existing mushroom cultivation farms can help begin producing this material using their different species, which each give the material a different quality. Therefore, as the technology, and cultivation, is already in place, it is money that is needed in order to begin large scale production. 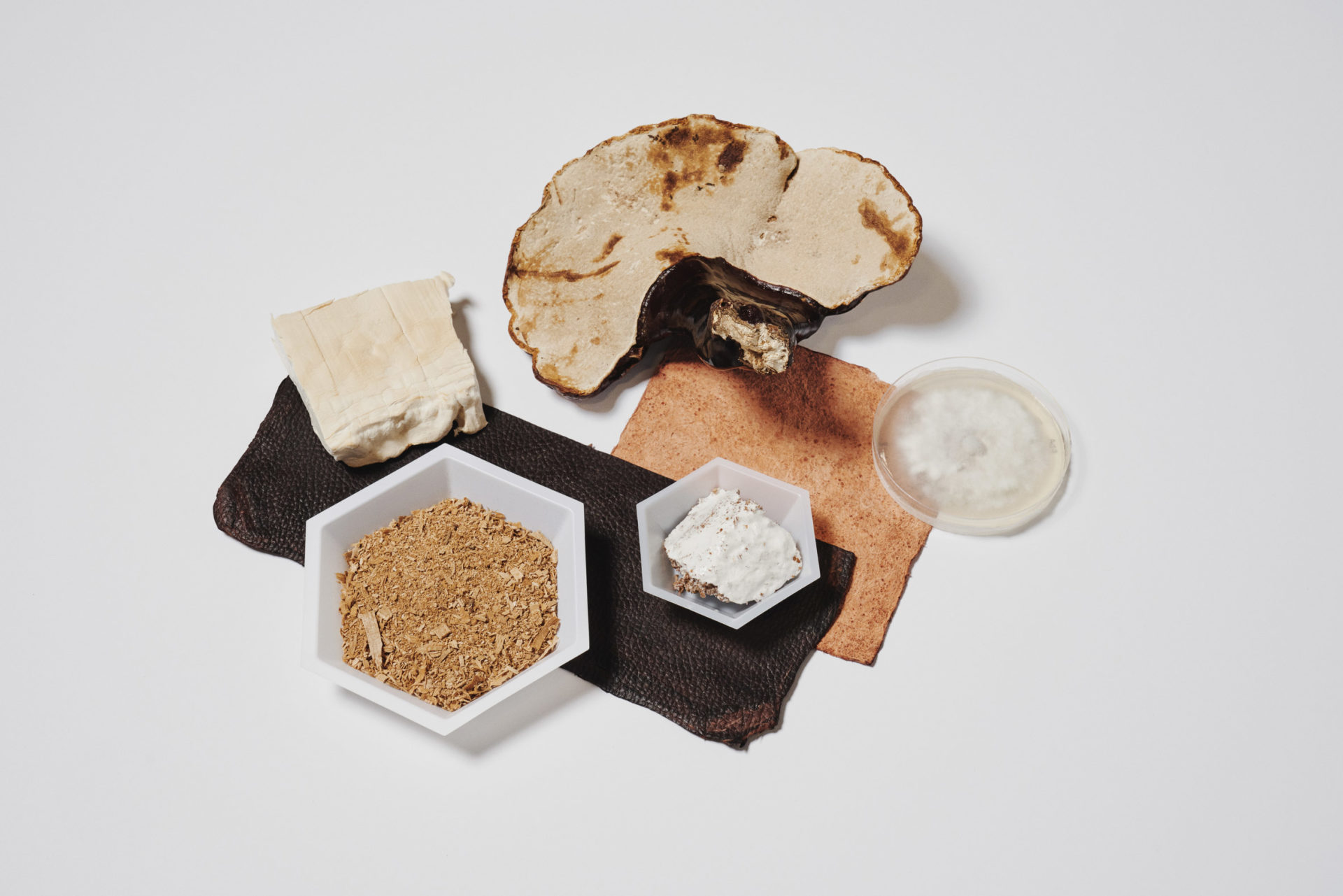 The mycelium’s fine strands are initially grown, which when spread out, are put into a bed of sawdust and other organic material on a large square growing mat. During the growth process it is important to control temperature and humidity levels to make an ideal environment for the mycelium to grow. This not only helps speed up the growth, but also keeps the mycelium stable, thus stopping any chance of it dying. A thick foamy sheet of the mycelium’s woven structure will begin to grow, which is then collected when at the ideal thickness. This growth process takes around eight to ten days, while cattle can take eighteen months to five years to rear. Then finally this is then processed, tanned, dyed and embossed based on specification, using sustainable alternatives.

Many synthetic leather alternatives are actually made from petroleum-based plastics such as polyurethane or PVC. These of course can be very damaging to the environment and can take hundreds of years to degrade in landfills. Mycelium, however, is able to be composted and if its processing is sustainable can be beneficial to certain environments when degrading. 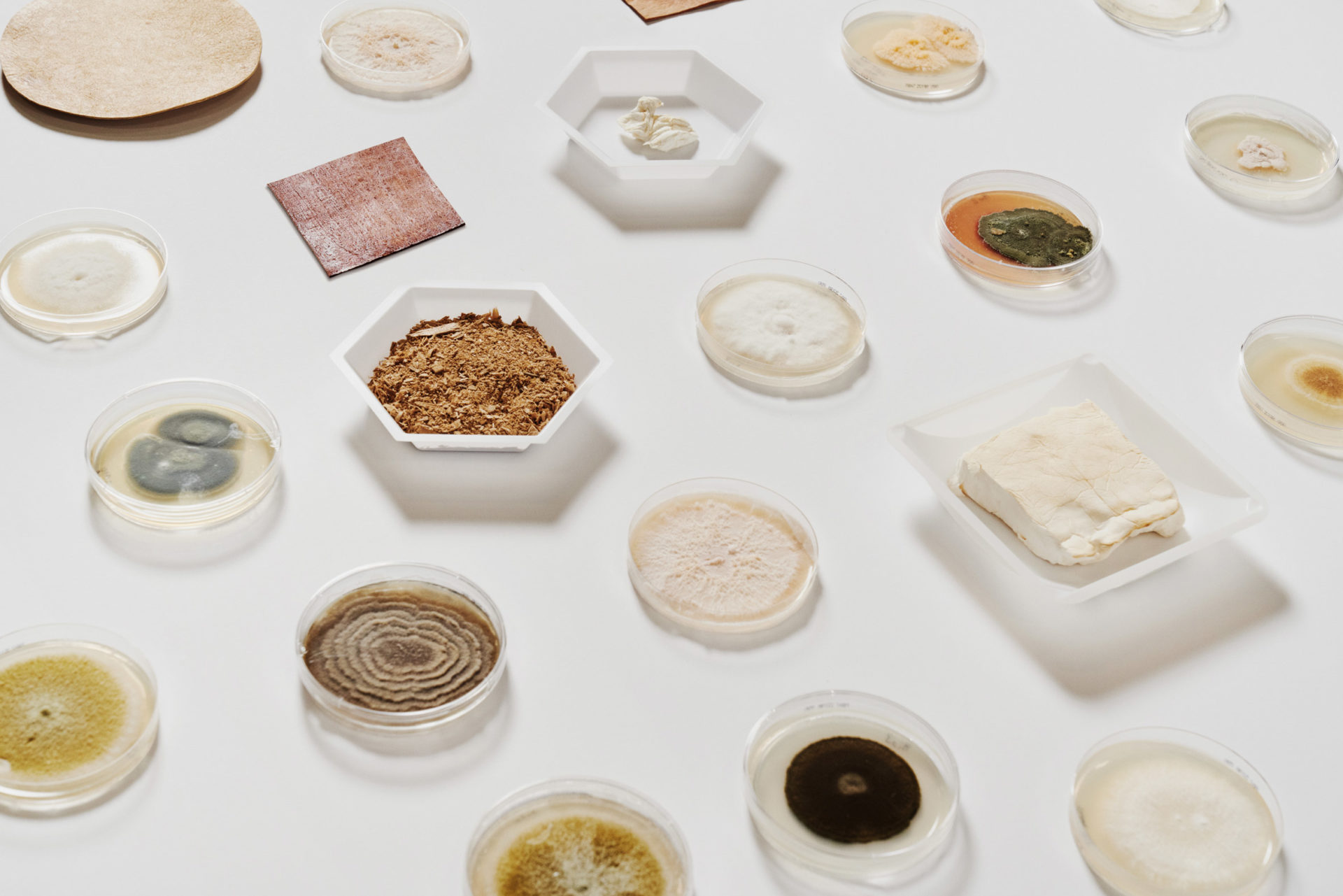 The news that this material will now be invested in by the four brands in the Mylo consortium is huge news within the biomaterials industry. It is now the first of its kind to be scaled up to this degree. Many biomaterials are still in the stage where they can only be produced in small quantities for one-offs and as museum pieces. But what this move now means is that millions of people could begin to use and wear this material every day. Fashion is one of the fields that is trying to become more sustainable. This could be as it allows for more experimentation with design, materials and costing. But one major factor is that it needs to be more sustainable as it is one of the most polluting industries. Many brands are now trying to be more sustainable, whether that be through going fur free or using vegan leather. But advances in biomaterials at large scales is the next step.

The investment agreement means that these brands will have exclusive rights to the mycelium material once it’s production is scaled up, with the first productions estimated to be sold next year. Bolt Threads decided to work with these particular brands to strategically showcase the material in its initial roll out. Seeing it in luxury products, and highlighting its performance properties within sportswear. The customers of these brands may also be different, and purchase at different price points. But the reason it is important is that these funds mean that Mylo can be produced at the same speed and efficiency as other materials. This in turn makes it more affordable for other companies to eventually use, meaning it will be readily available and at better price points.

Different products are expected to be produced from the material by the different brands. Lululemon has said that Mylo would be used in its accessories and exercise equipment . While Adidas’ vice president of global strategy, James Carnes, has said that they plan to make a trainer from the material at a slightly smaller quantity to their usual launches. But there is potential to use the material in larger quantities to ramp up production and apply it to more products in the future.

Stella McCartney has worked with Bolt Threads for a number of years and was one of their first advocates. She began by creating a biodegradable tennis dress in collaboration with Adidas, made from Bolt Thread’s lab-grown spider silk. She has also previously used the mylo material to make a special edition of her iconic, chain-trim Falabella bag. But this was a one-off piece which was on display as part of the V&A’s Fashioned from Nature exhibition.