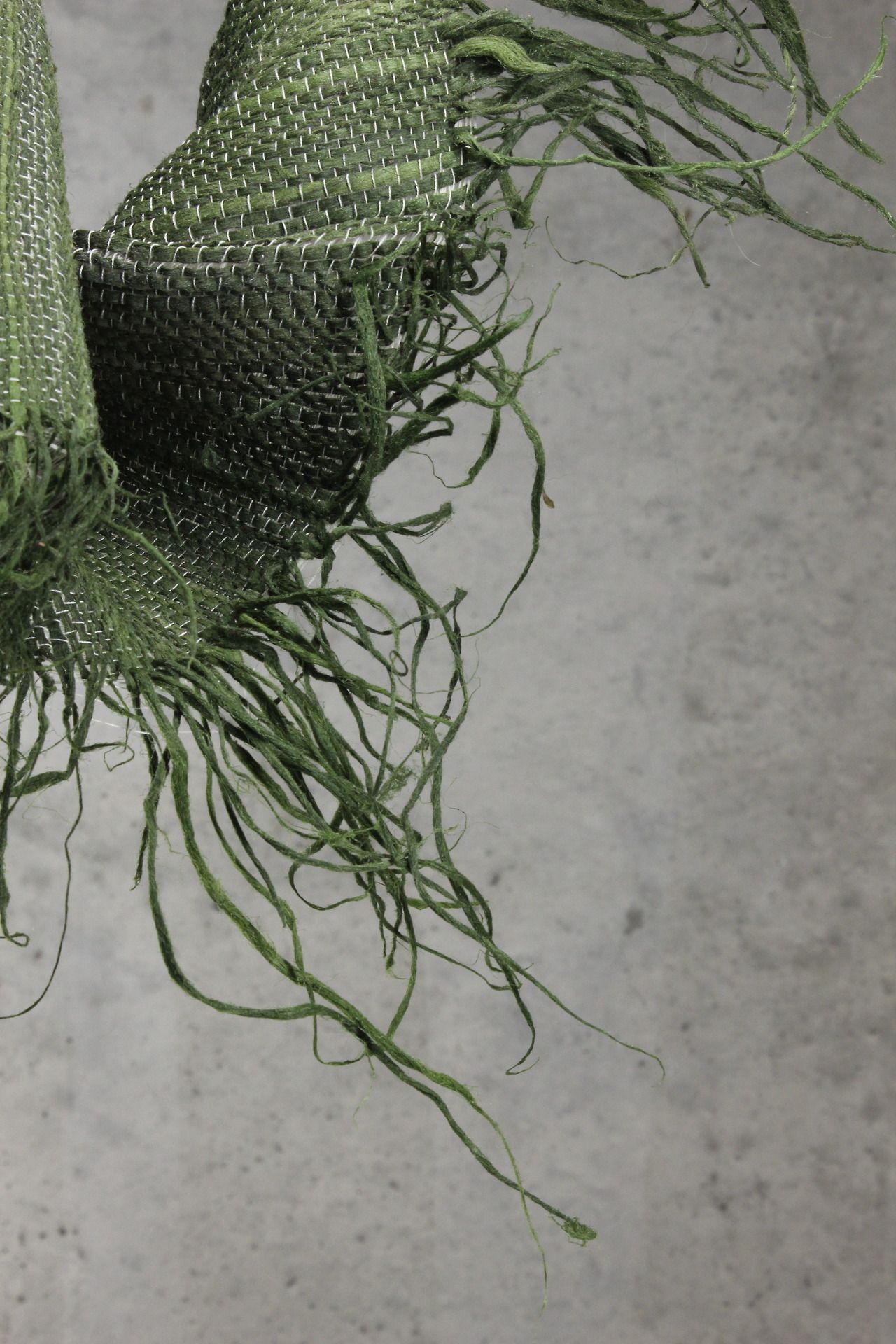 Algae are known as a nuisance by many. They are typically known to bloom in home aquariums and coastal resorts, turning the water green. But algae are an integral nutritional food in many cultures, but as a resource they are still incredibly underused. Algae is known to bind heavy metals, supply important minerals or create biofuels, as algae stores energy as oils and carbohydrates which means they can produce from 2,000 to as many as 5,000 gallons of biofuels per acre per year. But in the biomaterials field they can be used to create bioplastics while absorbing carbon dioxide from the surrounding air.

Melanie Glöckler
Algae grow up to 40 times faster than rooted plants. Due to this rapid propagation, they are often seen as a nucessence as they grow in unwanted areas. But as they are so fast growing, and all they need to grow is light, water and nutrients. They are a viable resource to use as materials, such as an alternative to cotton. Melanie Glöckler is a graduate industrial design student from Burg Giebichenstein University of Art in Germany. Within her course she explored biotechnology as a replacement for unsustainable materials during the classes’ project, Microbes. Her study looks at the growth and utilisation of fibrous algae to be used in textile contexts. The algae are processed by newly interpreted technologies into either semi-manufactured products or up to a finished grown product. By exploring different technologies for algae material production she is able to show different applications for the materials and different manufacturing techniques.

ORTEX
Vortex is a concept that spins fibrous algae into yarn. As long as algae stay in water it is easy to separate or treat them. Lifting them outside, they glue together immediately.
Production process:
1. Keep the vortex slightly above the longest part of the yarn
2. Add more algae so that the fibres connect with each other and lengthen the yarn
3. Speed up the vortex and spin the yarn
4. Turn the crank
5. Start again and redo steps 1-4 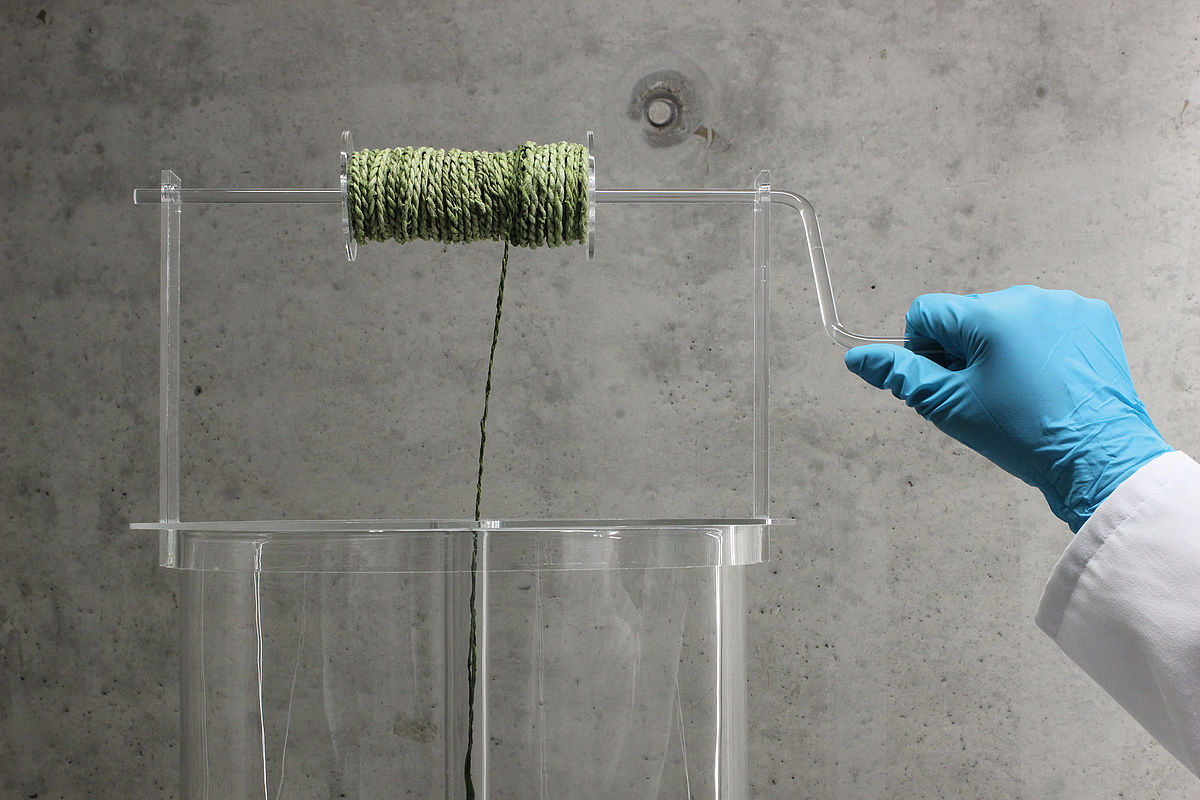 DEEP DRAW
When algae are exposed to intense sunlight they produce large amounts of oxygen. The oxygen is caught under the dense algae mesh, so that the algae float on the water surface. This effect can be used for a shaping process that is similar to the regular plastic deep drawing process.
Production process:
1. Submerse the tool with the perforated mould into the water and place it underneath the mesh of densely grown algae
2. By lifting the tool, the algae take the shape of the mould
3. Let it dry

3D GROWTH
Due to the fact that Cladophora adhere to surfaces it is possible to grow predefined shapes or coat surfaces.
Production process:
1. Cover the gauze with spores of algae
2. Place the covered mould into the nutrition tank
3. Let them grow
4. and grow
5. and grow
6. The algae adhere to the gauze and coat it during growth
7. Use a water jet to link the fibres with each other for a fleece
8. Let them dry 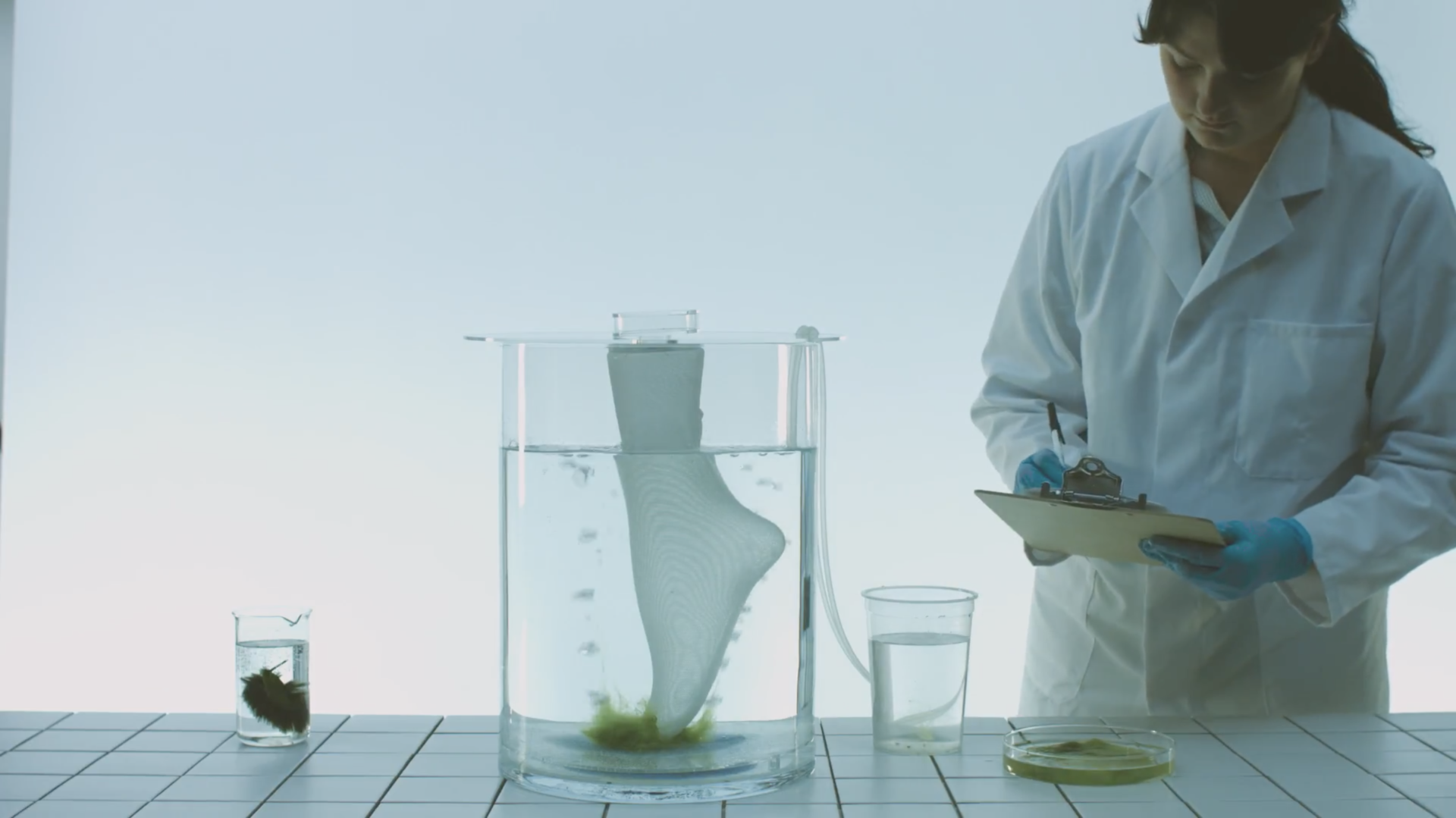 Studio Tjeerd Veenhoven
With a similar response to the textile industry, product design studio Studio Tjeerd Veenhoven have looked at using algae fibres as a replacement to more polluting textiles. They report that 95% of textiles are burnt after their lifespan. Therefore, Project AlgaeFabrics envisions algae as a future raw textile material. Cladophora, an algae species, is rich in Cellulose making up to 70% its content, making it perfect for material making.