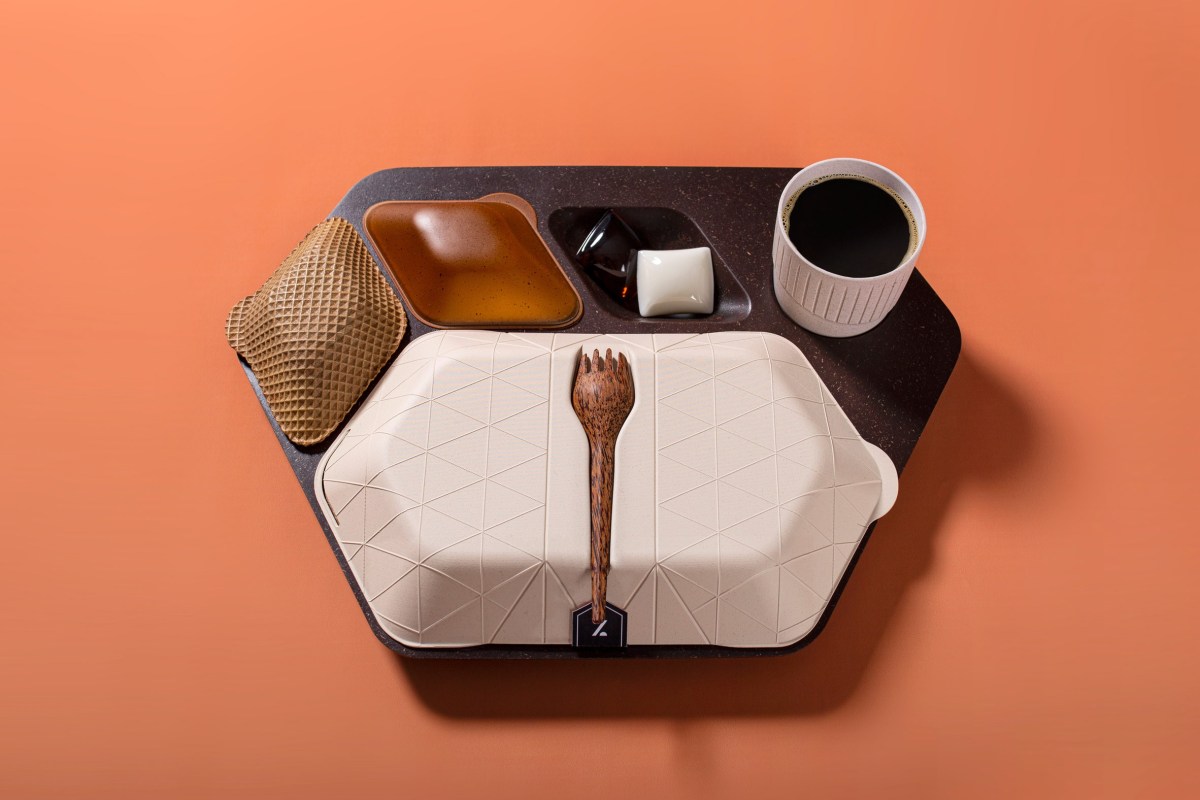 Get Onboard : Reduce. Reuse. Rethink

Get Onboard : Reduce. Reuse. Rethink

Industrial design studio PriestmanGoode have created a flight dinner set made from sustainable materials, replacing the usual single use plastic options currently being used.  The design was developed as part of a new exhibition at London’s Design Museum titled Get Onboard: Reduce. Reuse. Rethink. which is part of London Design Festival 2019. This exhibition aims to raise awareness of how much waste is generated through air travel. 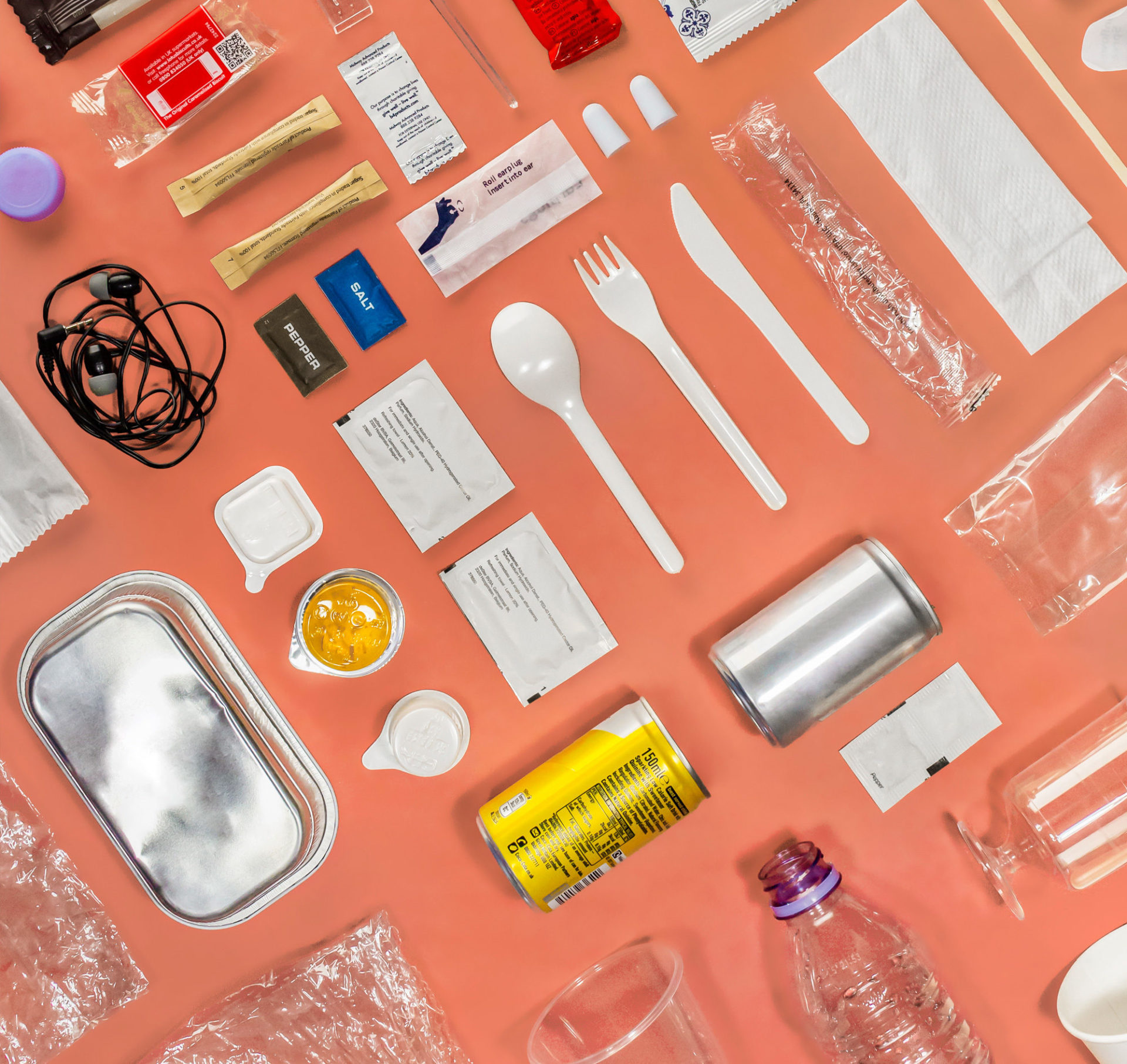 There is an estimated 5.7 million tonnes of cabin waste on global passenger flights each year, from products such as earphones, toiletries and food waste. It is calculated that every passenger on a long haul flight generates more than a kilogram of material waste, and the studio found that an average of 500 grams of that waste is single-use plastic.

PriestmanGoode’s decision to eliminate throwaway plastic was prompted by the recent legislation passed by the UK government in March 2019 to ban single-use plastic products such as plastic plates, cutlery, food containers and expanded polystyrene cups by 2021.

These proposals aim to make use rethink our current system and behavioural patterns. By using new innovations in sustainable materials we are able to envisage a future which isn’t too far away. And while this project focuses on air travel these designs can be implemented within many sectors across the travel industry and more. 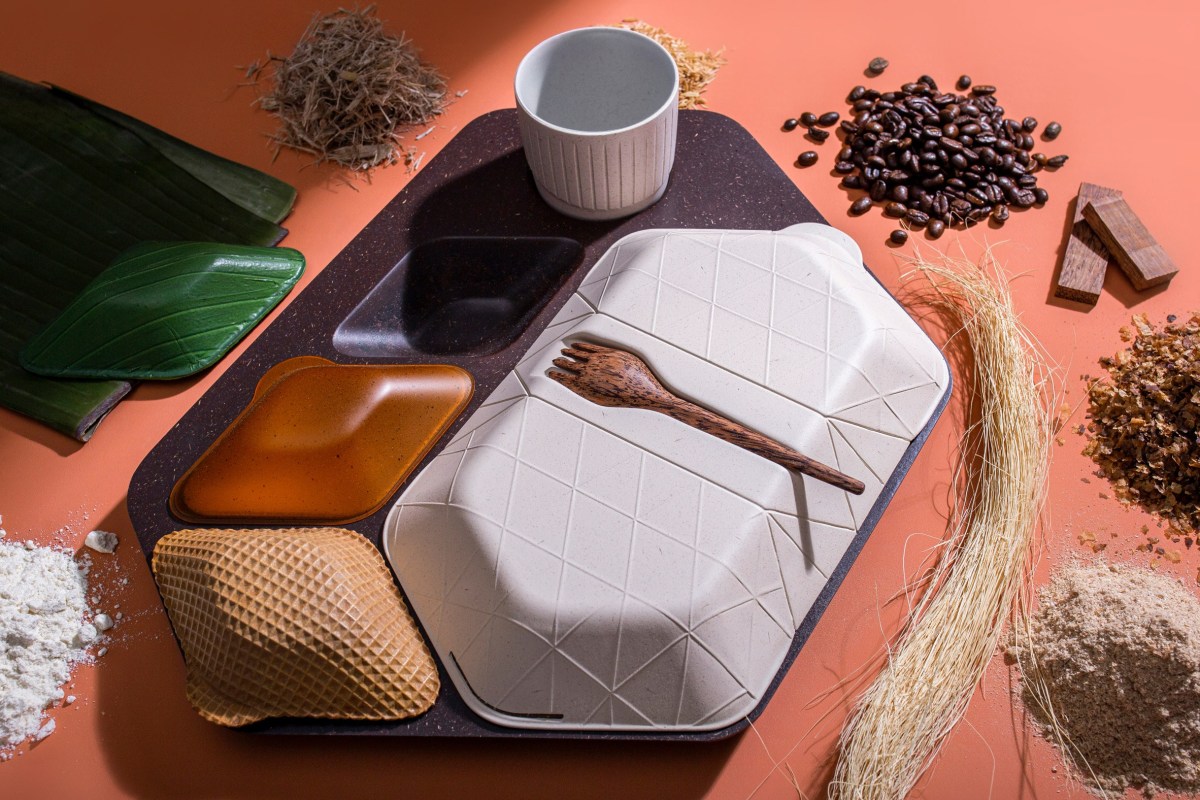 The meal tray and its various components are made from edible and commercially compostable materials. The tray itself has been made from coffee grounds and husks. These aggregates are mixed with a lignin binder, which is derived from the tough organic material that binds the cells and fibres of plants together. While the base containers that fit into the tray have been made from wheat bran.

Coconut wood has been used to make a multifunctional pieces of cutlery. While the cup is composed of rice husk mixed with polylactic acid binder, which can be made of renewable resources such as corn starch or sugar cane.

To replace any small plastic pots, that usually contain products such as milk, capsules have been made from soluble seaweed material, with a cup liner made from algae. 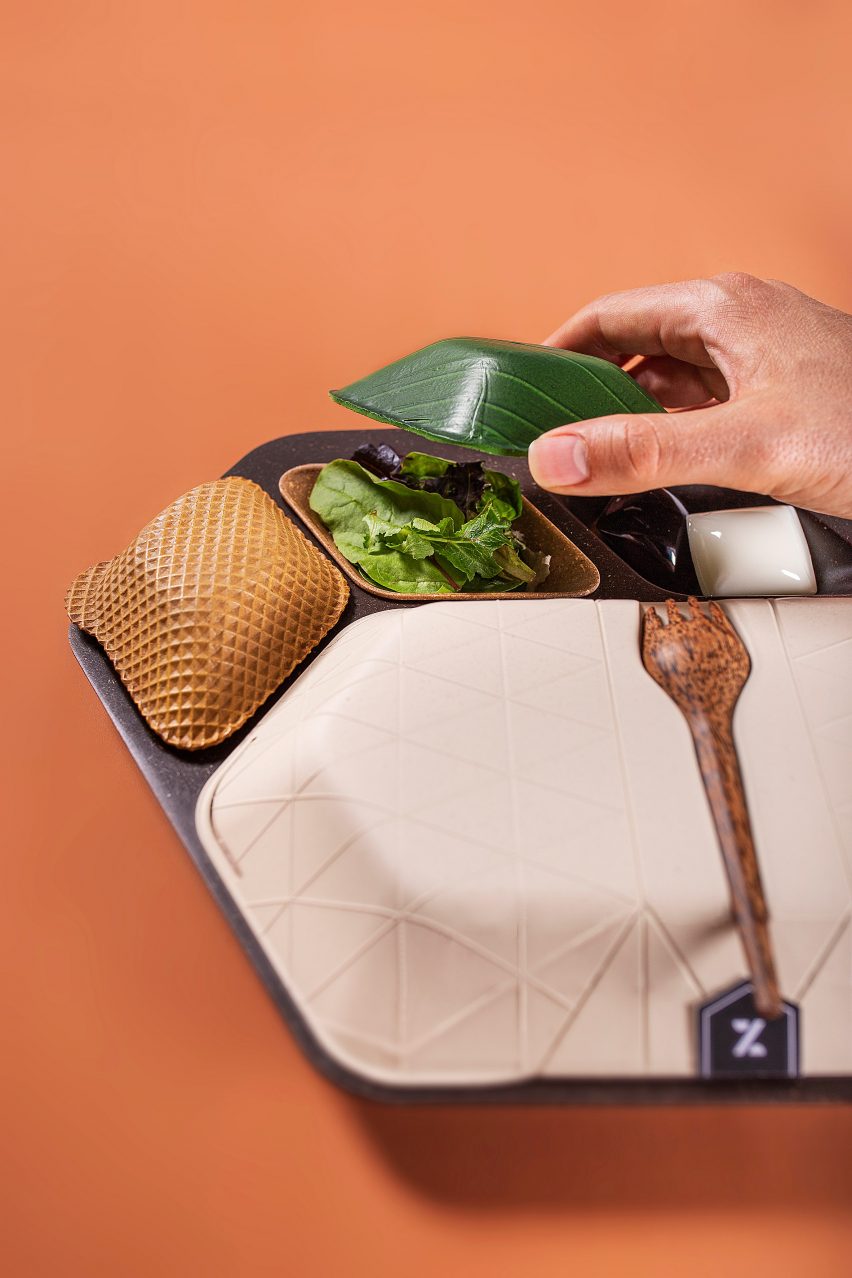 These designs are aimed to be used in a similar way to current trays. The components that are usually washed and reused are made to do so, whereas the one use items are biodegradable, so can be composted or eaten. Some of the material choices were also made to reflect what is contained inside, such as algae or banana leaf to make a lid for the side salads, and a wafer for the dessert lid.

All waste items can be kept inside the main meal lid, which closes down into a compostable pack for more efficient disposal. 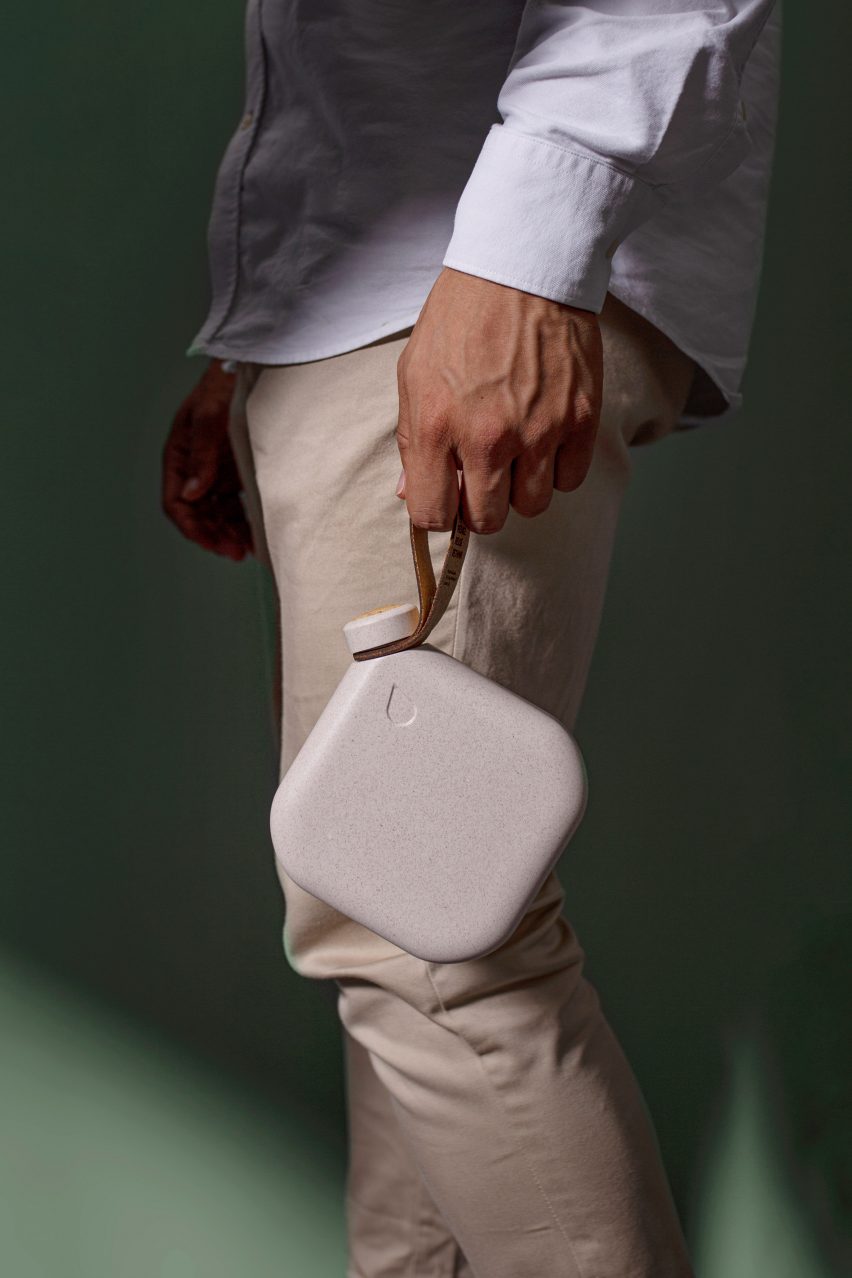 According to Heathrow Airport, if passengers at the departures lounges refilled their bottles from water fountains instead of buying plastic bottles, the airport could reduce its plastic bottle consumption by 35 million a year. This is why the studio has also created a refillable water bottle for travellers. The bottle is made from cork and commercially compostable bioplastic. The idea is that the bottle is used for the average length of a holiday. It is a square shape to allow it to be as efficient as possible during travel, allowing it to fit into the pocket of the seat in front of you. While also making it more space efficient within cases and storage.

Along with the bottle design a concept for a water-cooler cart onboard the aircraft has been imagined. This system would allow passengers to refill during their flight, as well as walking to a water-cooler in the galley. 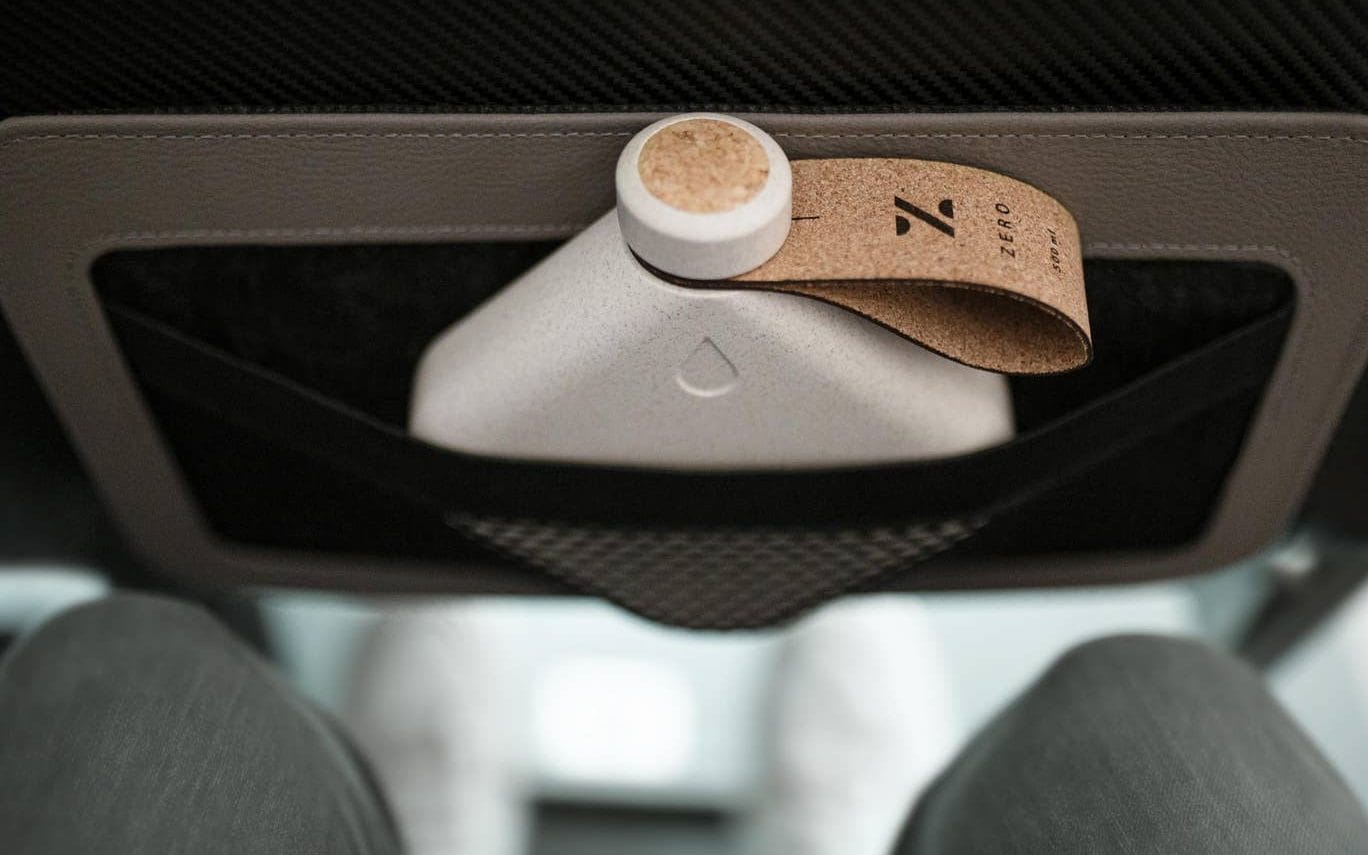 In PriestmanGoode’s concept, passengers would also be able to pick and choose what they need prior to their flight from a list of items. By giving passengers an option waste could be reduced drastically as people may wish to bring their own products. A reward scheme could also be put in place for those who opt for the more eco-friendly and waste-free options.

Although these ideas may seem currently unattainable because of the amount of products and systems that would need to be changed, this may be something we will see more of in the near future. Due to current legislations about the use of single use plastic, and the ever growing conscious consumer, changes will need to be made as soon as possible. While we could choose not to have unnecessary travel, sometimes it is hard not to travel. Therefore how can we make this as sustainable as possible? Could this be started by simply changing certain materials within the cabin?

Get Onboard: Reduce. Reuse. Rethink runs at the Design Museum in London, until 9 February 2020.