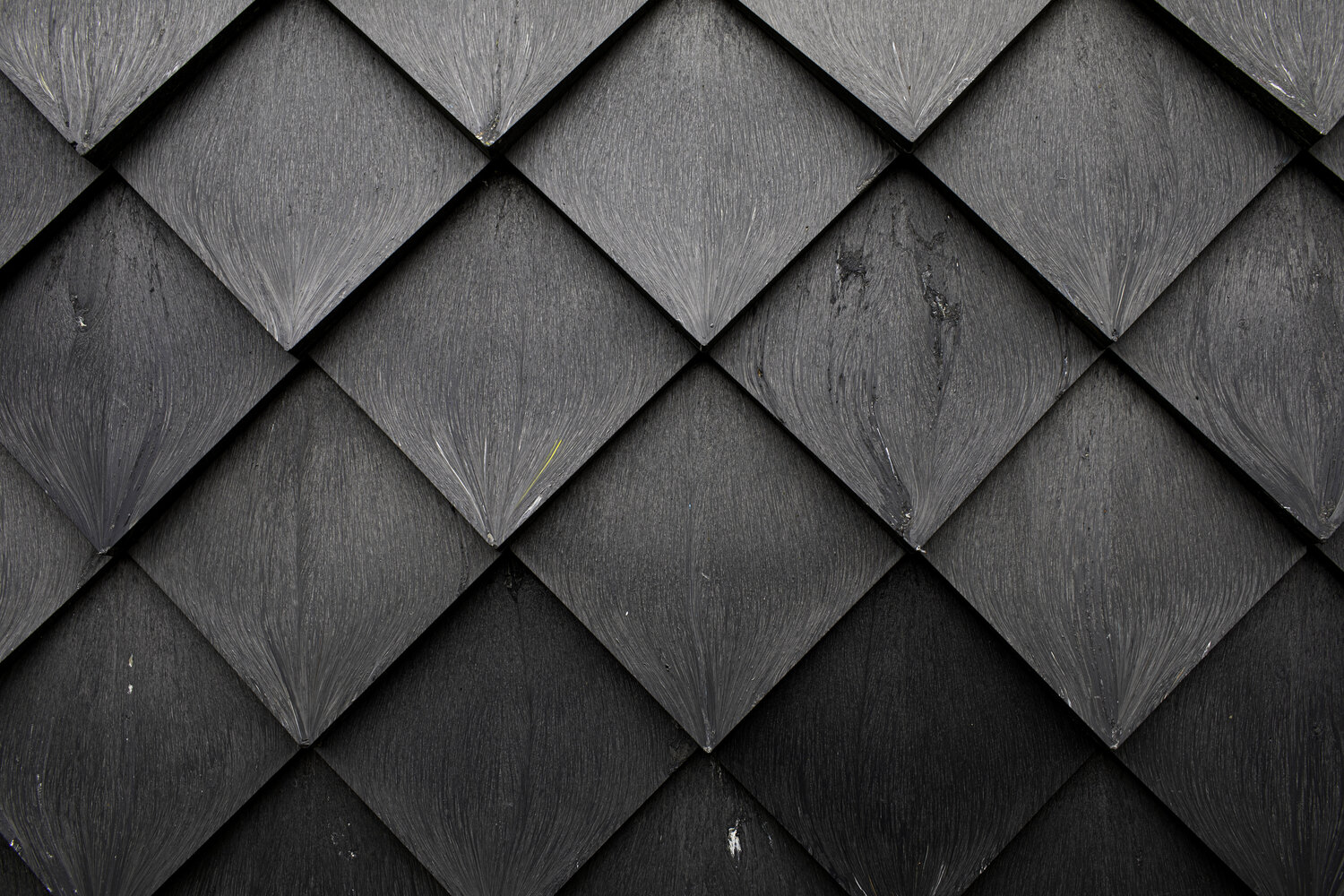 The construction industry has a huge impact on our environment. The production of building materials from the natural resources used to the machinery contributes negatively, with estimates suggesting that it contributes to 36% of worldwide energy usage, and 40% of CO2 emissions. There is also a large amount of hazardous waste produced. 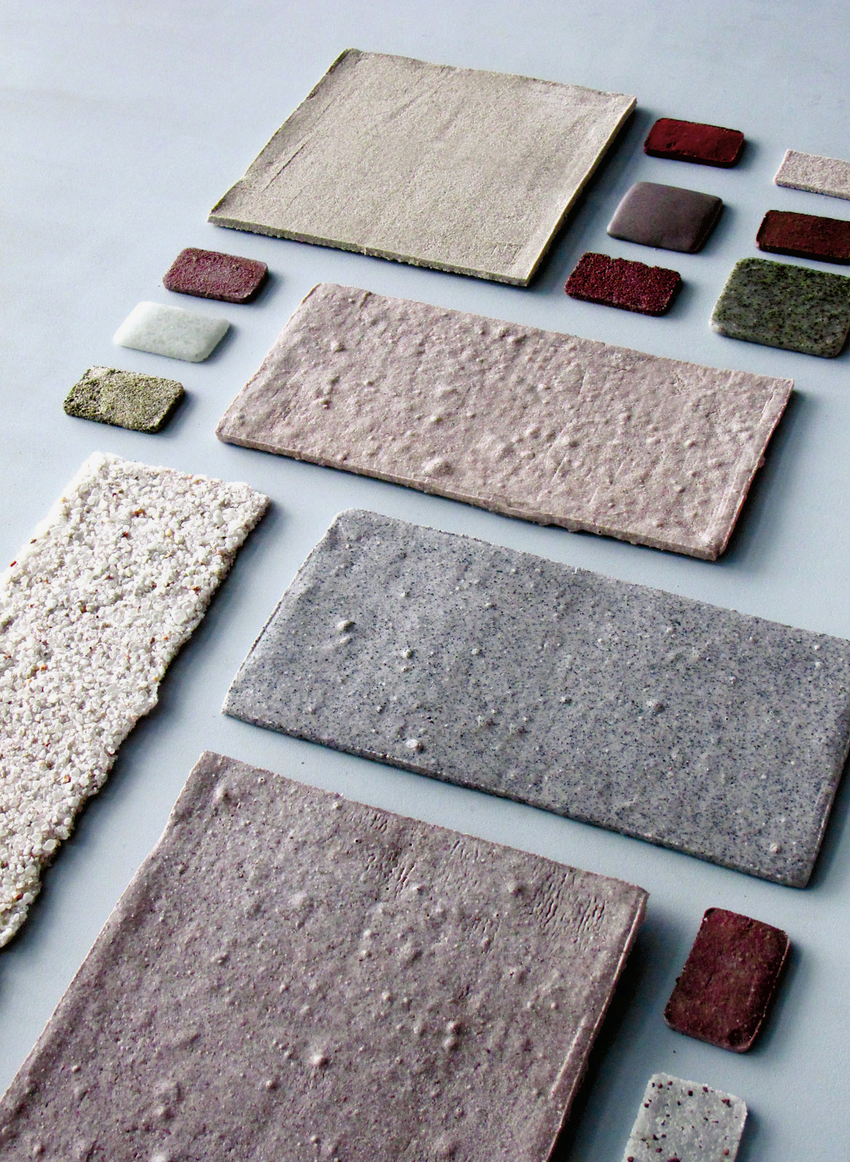 One of the most common materials used in construction is concrete, which is a composite material composed of aggregate and bonded together with a fluid cement. The manufacture of concrete has resulted in over 2.8bn tonnes of carbon dioxide, which equates to around 5% of CO2 emissions. This large figure comes from the processing of the material where it is heated to over 1,400°C in the chemical decomposition process of limestone during clinkerization. There have been innovations in concrete, including “self-healing” concrete, “concrete-on-a-roll”, concrete printing, and pollution-absorbing cement. But due to modern methods of fabrication and a deeper understanding of materials we have been able to explore construction of buildings in new and exciting ways. 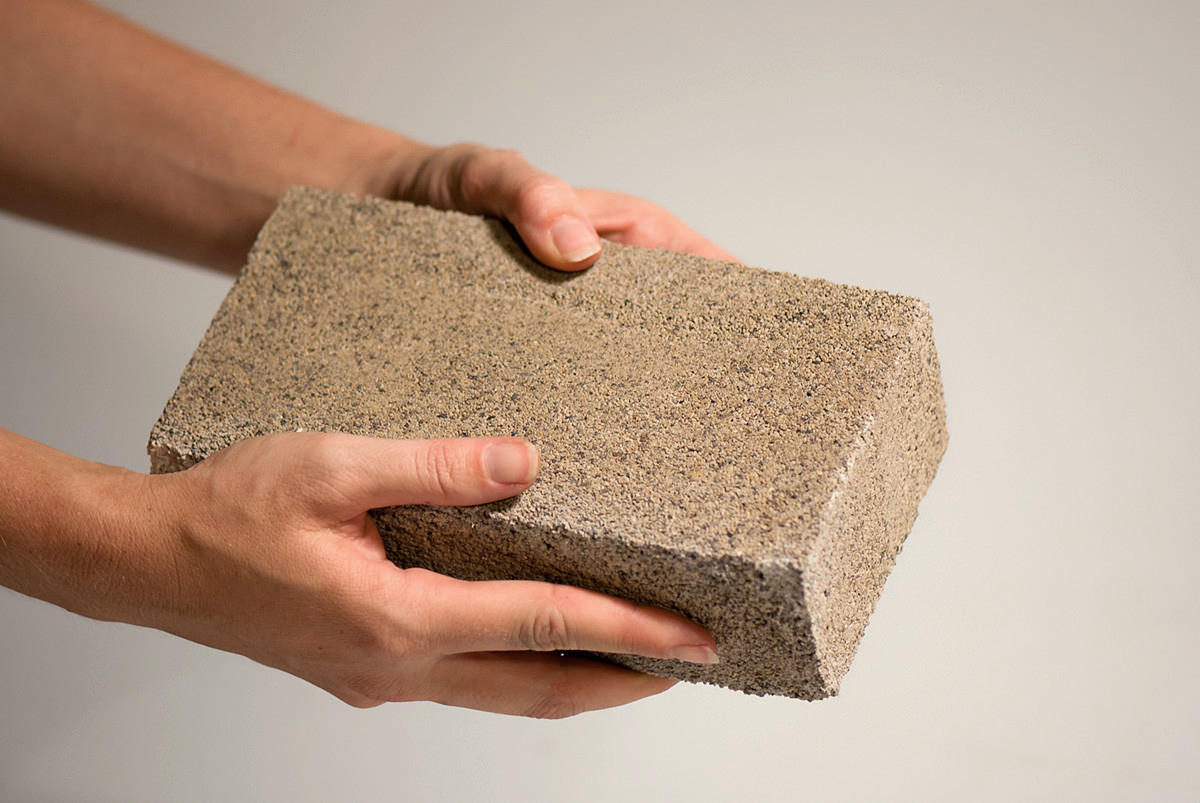 Kenoteq is a scottish startup that has created a sustainable brick called the K-Briq which is unfired and made of 90% construction waste. It is estimated that it creates less than a tenth of the carbon emissions in its manufacture than a regular brick. The brick is planned to be used to build this year’s Serpentine Pavilion, which has been designed by South African architecture studio Counterspace.

StoneCycling has created a WasteBasedBrick made with different ingredients according to whatever is available locally and whatever is suitable for the future building. The construction refuse used includes crushed ceramic, glass and discarded clay. They have collaborated with design firm Studioninedots to create the TrueTalker installation which is a conical sculpture of bricks with a large fireplace at its heart. A space designed as a public pavilion in Amsterdam where people were invited to relax and exchange ideas. 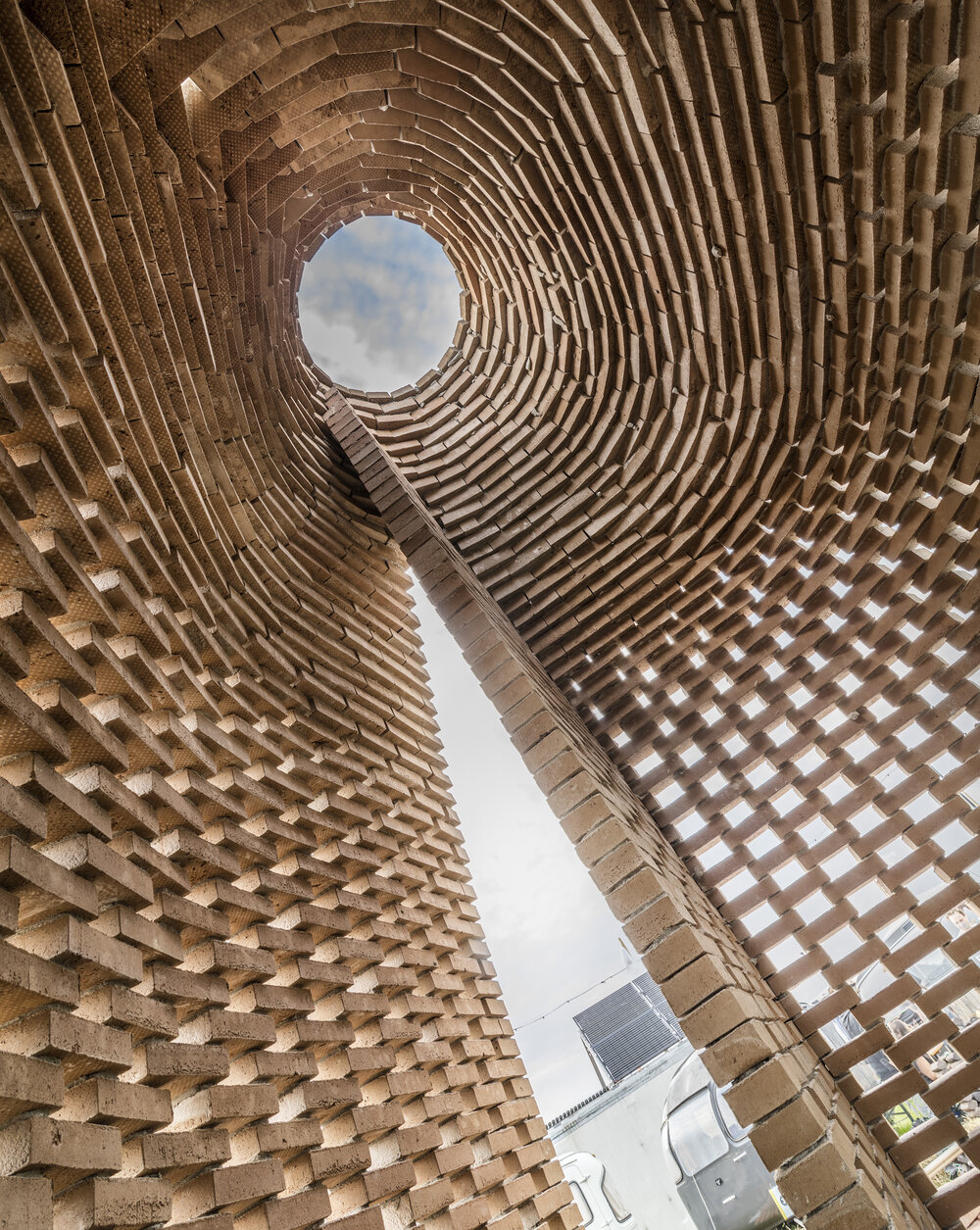 BioMason grows bricks and masonry from scratch without the need for any heat using a process that’s millions of years old. During their manufacturing BioMason injects sand with microorganisms to initiate a process like the one seen in coral growth, as each grain of sand is covered in the bacteria. Calcium carbonate crystals begin to form around the sand in a process that takes around four days using an irrigation system that feeds the bricks nutrient-rich water to create a brick that is strong enough to use in construction. 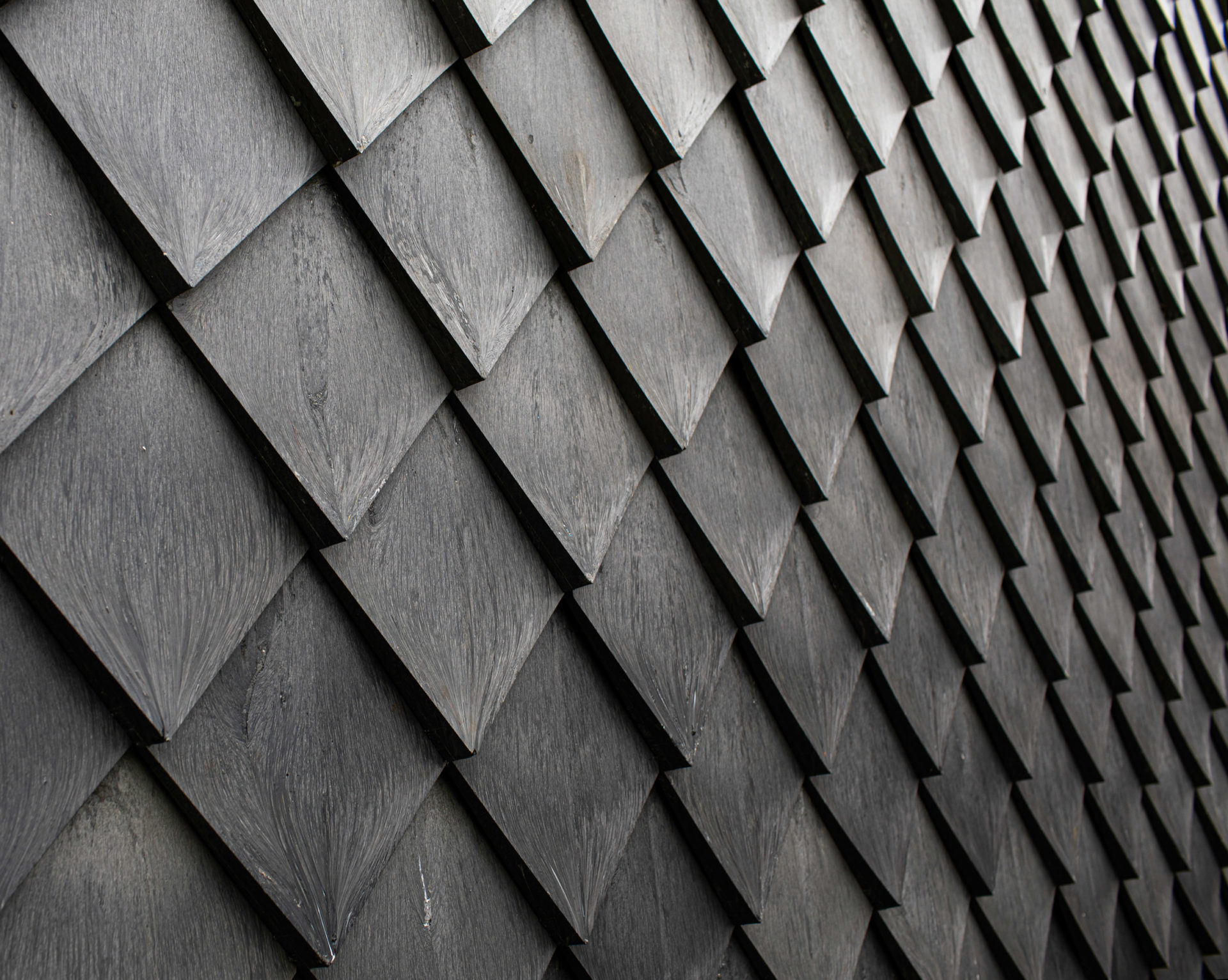 Another way to make buildings more sustainable is by using alternative materials. Natural materials such as wood and mud have been used in construction for thousands of years, with Earth Architecture becoming popular. This ancient building technique uses natural raw materials such as earth, chalk, lime or gravel to create a rammed effect. As we now produce a large amount of materials and have materials which are in our waste stream another option could be to use recycled materials. We know that plastic is bad in its manufacture and there is a huge problem with single use plastics due to the unmatched lifespan of the product compared to the material. But could plastic be used to clad housing to make it hard wearing? Dutch studios Overtreders W and Bureau SLA have created facade cladding tiles made of recycled PVC construction waste. Pretty Plastic is claimed to be one of the first 100% recycled cladding materials in the world. It is made from shredded PVC building products such as window frames, downspouts and rain gutters.