Beyond Baselines: Exploratory dives in the Outer Hebrides

Beyond Baselines: Exploratory dives in the Outer Hebrides

Mae Dorricott / Sometimes there comes a point in a dive when you think that you should turn around and go back. There isn’t anything of interest here. But you can’t help but listen to that little voice, “Oh, just one more corner!”. That one more corner led us into a dead end. The rock walls created an underwater cul-de-sac and the kelp bed swayed in the currents below. It was pretty, for sure, but not what we we’re looking for.

I turn to my buddy Kirsty, to decide which way we should go next. But as I look round, she’s disappeared.

Maybe she headed out already? Before I make a move though, a torch light shines out from a dimly lit corner of the “dead end”. Kirsty’s head pops out from the dark and gives me the look of, “What are you waiting for? This way!” 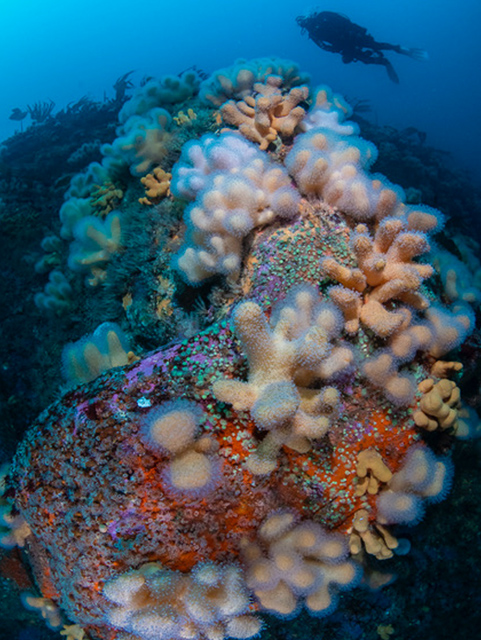 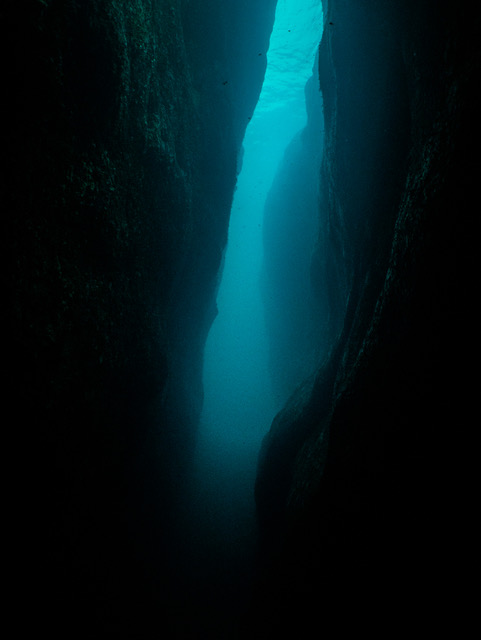 I follow her fins into the dark that lead me under a boulder lodged between tall rock walls. Suddenly, we’ve entered a cathedral.

Light glimmers down through the clear blue water into this narrow pass carved out from the coastline by wave action and time. Just wide enough for us to swim in a single file and turn around and share expressions of awe. The pass kept on going, penetrating further into the headland. We follow our newly found pilgrimage path as the surge of water pulls us back and forth through this skinny passage-way.

All we could do was follow the slosh of water with our bodies. There was temptation to hold on tight to the walls, but a torch light shine reveals that every inch of the walls was thriving with life. Sea squirts, jewelled anemones, hydroids and sponges monopolised this high rise real-estate. It was living graffiti, eluding to the life that this scene lives when outside visitors such as ourselves have gone. We emerged on the other side back into the kelp forests and turned to each other. Our eyes wide, filled with all the imagery we’ve taken in. That, was special. That, was somewhere that had probably never been seen before by terrestrial eyes. That, was the reason why we love British diving. 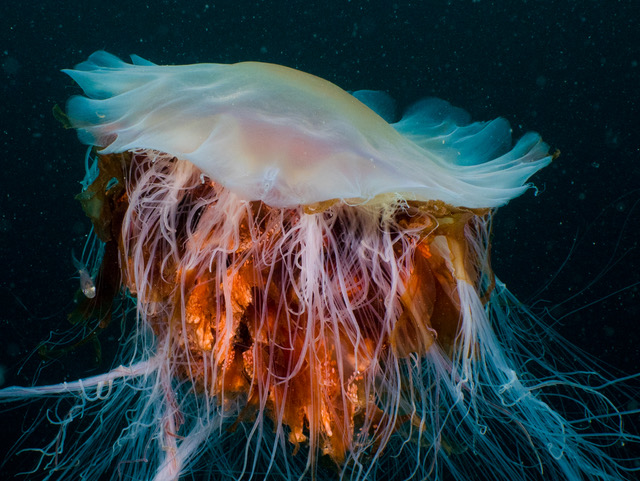 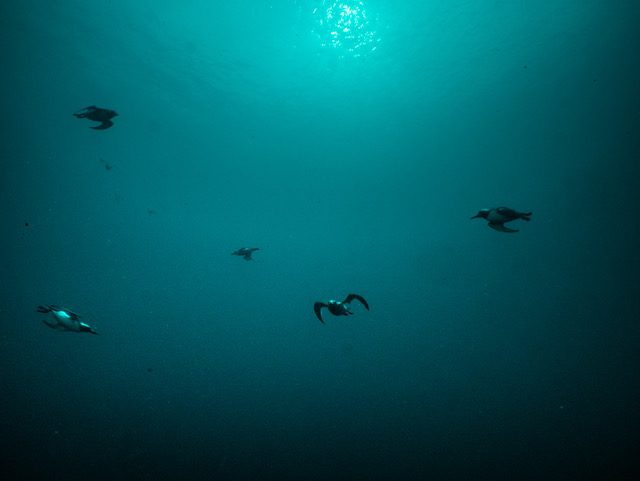 Yep. Believe it or not, that breath-taking dive was in British waters. We were aboard the Halton, a hearty ex-fishing vessel with years of experience in these rolling seas, providing the perfect base for our expedition to the North Coast of Scotland. This secluded coast line must be one of the most rugged and beautiful landscapes I have ever seen. The sense of being present in a far-flung part of the British Isles was encapsulated by the islands we explored that had been abandoned by communities in the 1930s. Eilean Nan Ron – The island of Seals now stands forsaken. Derelict homes with no roofs crumbled by the edge of the cliff and the sheep that have been left behind now held the land that their owners used to farm.

However, this was just part of the journey to main attraction, which was a bit more remote. A little bit further around that “corner”. From the very north point of the Scottish mainland, we headed out to sea, further north for a 6-hour steam. 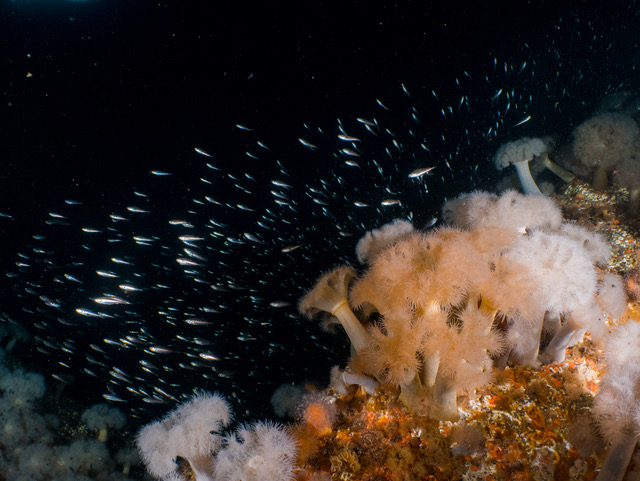 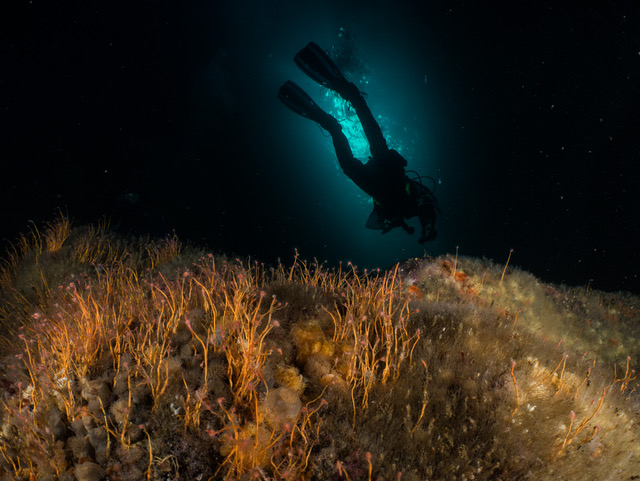 Slowly but surely, two lumps of land on the horizon became closer and closer. North Rona and Sula Sgier, the two very northerly islands of the Outer Hebrides.

These islands are known for their colonies of sea birds, where still to this day, men from the Isle of Lewis sail small craft boats to Sula Sgier once a year to traverse the sheer cliffs harvesting Guga; baby Gannets. This tradition has been passed down for centuries. It involves a lot of skill and is almost considered an art.

As we approached the cliffs an overwhelming sense of how much these islands are an important refuge for these sea faring birds becomes apparent. Not only did Gannets swirl above, imparting quizzical looks as they flew by, but there were also Puffins, Razorbills, Skewers and Guillemots inhabiting the islands. Why would so many birds colonise these aloof lumps of land? The answer was why we had brought our dive gear.

Jumping into the cold but clear waters we were immediately transported into another world where Grey Seals can be easily mistaken for a mermaid-like creature. Curious but cautious, they zip in and out from the canopy of the kelp. They tried to position themselves in such a way that our clumsy dive gear prevented us from seeing them sneak up from behind. Yet, after a bit of play time, we were able to gain their trust enough to get pictures of their gorgeous big puppy-dog eyes. 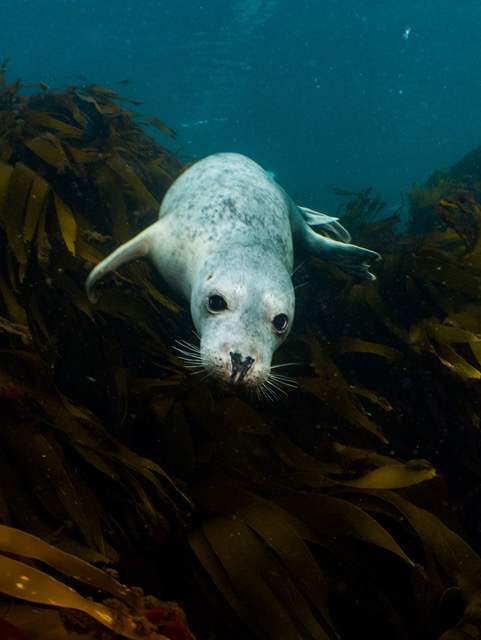 However, it wasn’t all about the mega fauna here. Granted the seals were completely captivating to experience underwater. But in this brimming and colourful marine habitat, things didn’t have to be a fast, agile, marine mammal to capture our attention!

The relentless North Sea has burrowed its way through the islands, creating furrows and tunnels that are not just the perfect swim through for a pod of divers like us but additionally diverse niches for benthic life.

An array of living creatures clung to the walls utilising every inch of space and competing for prime positions where the water movement was strongest and therefore the best spots for the buffet of nutrients swinging by. Juvenile fish cowered away in the depths of the caverns, finding refuge from the plummeting sea birds above.

There was life on top of life here. Every inch of boulder looked like a painter had splattered his pallet and the most wonderous creatures had grown out from it. The soft coral, dead men’s fingers (Alcyonium digitatum) grew on the underside of rocks where the Kelp sprung from above. Between the branching corals were small anemones, like fluorescent jewels to be mined. Squidgy sea squirts of all shapes and sizes, some like light bulbs, others like baked beans wiggled their way into any other free spaces. And more life found it’s way on top.

Then, we were further spoilt like a kid in a sweet shop with the number of nudibranchs (sea slugs) we saw. (Nudibranchs’ are definitely my geeky guilty pleasure!) On just one frond of kelp was a barricade of nudibranchs. Top to tail they grouped together to munch away at their favourite foods, bryozoans and hydroids, and at the same time as eating, they also mated! Frisky little things. And they too were everywhere! 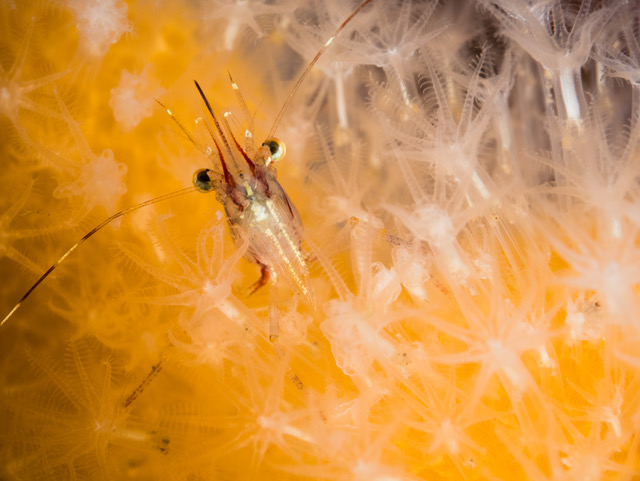 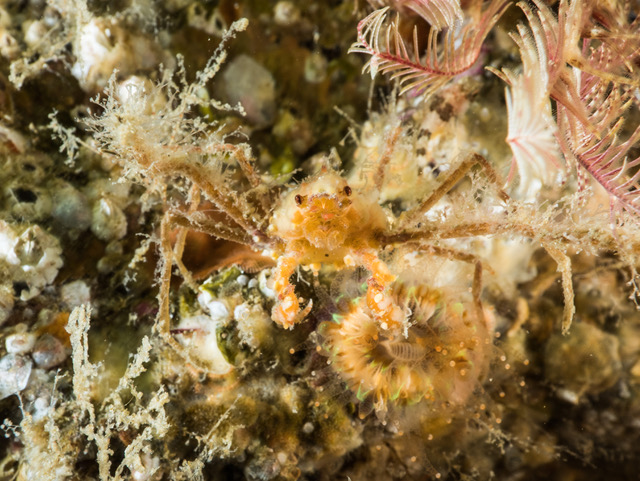 Even where you think you wouldn’t find life, it would be there. In the seemingly-like desert of the open water column, just a pause and stare at the macroscopic level reveals that the minute life of the plankton also thrives. Larvae of the animals soon to colonise the reef live here in the three-dimensional world of the open sea.

Additionally, and most amazingly, flying snails the size of a grain of rice zip and zap within this floating world. With an uncanny resemblance to the snitch from Harry Potter, this Pteropod has a modified foot. “Normal” snails use their foot to crawl around the undergrowth, but this tiny snail’s foot has evolved into wings, that it uses to fly towards food and to escape from predators. It’s predator even looked ominous to me. The beautiful and dangerous Lion’s Mane Jelly fish hung in the shallow depths and stretched it’s poisonous tentacles out as a deadly retractable fishing net.

There is no doubt that from surfacing after each exceptional dive my fingers were stiff from the cold water. But it wasn’t just the tea of coffee on deck that kept my mind off the cold. The whole crew was buzzing after every single dive. There was always something spectacular, even if it was just simply the beauty of the topography, or, more understandably the bounty of life. It felt so special because it just seemed perfect. That was how an ecosystem should look like. Life upon life, entangled in more life, with life crawling on top. Every important component was there, which I feel is sometimes a scarce sight scuba diving nowadays when it’s rare not to see some form of human impact. 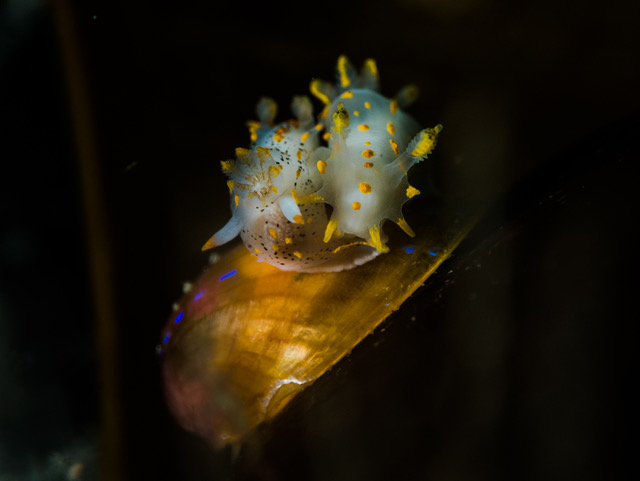 Yes, this was a remote location. Hence, it’s extraordinary completeness was expected! Yet, it took me by so much surprise, especially as it wasn’t a tropical reef but a temperate habitat off the coast of the UK!

Protecting areas, to allow the life to thrive like this is beneficial beyond hyperbolic expression. I fear that our baseline perception to how the seas should look like is shifting far too quickly. Even mine has changed to a point that even if I saw just one seal during the whole trip, I would have been impressed. However, seeing somewhere like North Rona and Sula Sgier, a place that for me is the pinnacle of the British Seas in it’s pure and untouched form, gives me hope. Hope for spots that are simply too far away from our daily grasps. 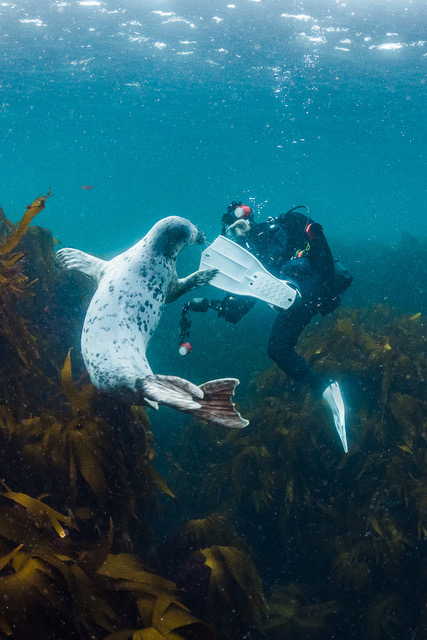